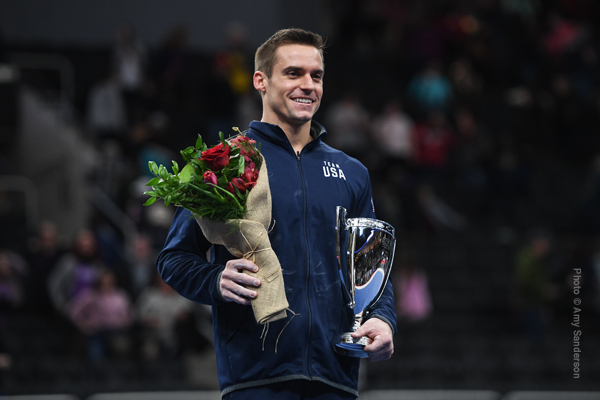 Sam Mukulak (USA) easily won the all-around title at the 2020 American Cup posting 85.332 and outscoring the rest of the field by more than two full points. Mikulak, who finished second last year at the event by .001, posted the top scores of the day on floor exercise (14.333/6.1) and parallel bars (14.666/6.4). “I definitely had to fight in a lot of areas today”, Mikulak reflected after the competition. “But winning that way, not having the perfect day, is somewhat reassuring I guess”, he commented afterwards. It is the second win at the event for the 27-year-old American who also won the title in 2014.

James Hall from Great Britain earned the bronze posting 82.999. The Brit had a very clean competition until his last event, high bar, where he had to count a fall on his Kovacs release move. Shane Wiskus (USA) finished fourth with 82.797, ahead of Daiki Hashimoto (JPN) who posted 82.757. The Japanese fell on pommel horse and then put his hands down on his Kasamatsu double twist vault, but posted the top high bar score of the day (14.225/6.2). With a clean competition Pablo Braegger from Switzerland amassed 82.439 and placed sixth.

The American Cup is part of the FIG World Cup all-around series (in addition to Stuttgart, Birmingham and Tokyo) where countries are looking to rank in the top three at the end of the four competitions to be able to qualify an additional gymnast to this year’s Olympic Games. For complete results of the competition click here.