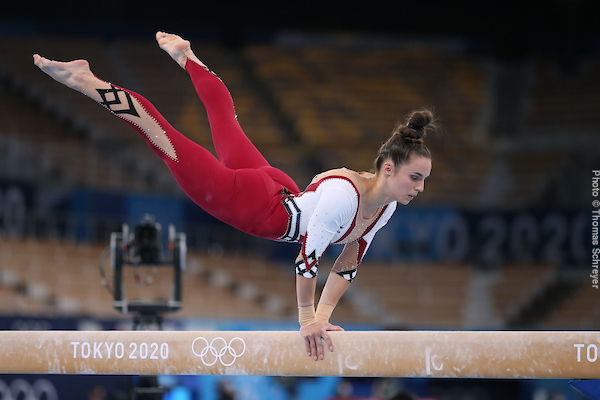 Pauline Schäfer of Germany told International Gymnast Online that the silver medal she won on balance beam at this fall’s World Championships in Kitakyushu gleams brighter than the gold she earned on the same apparatus at the 2017 Worlds.

“It is so amazing to have a medal of every color and I’m really proud of it, but the silver medal has the highest significance,” said Schäfer, who finished second in Kitakyushu, third at the 2015 Worlds in Glasgow and first at the 2017 Worlds in Montreal. “The last years and months were really tough for me, and this medal shows that I am stronger than ever, and that’s why it is so important for me. I proved to myself that I still can be world class.”

Schäfer’s performance in Kitakyushu restored the confidence she lacked at last summer’s Olympic Games in Tokyo, where finished 36th in qualifications. Her Olympic routine also lacked a troublesome acrobatic series, which she successfully performed in Kitakyushu.

“I struggled with the flic layout because of my mental block,” Schäfer said. “After a tough time in the gym I was not able to perform it at the Olympics. I was not ready to do it but after the Olympics I decided to do it again.”

Schäfer said failing to qualify for the balance beam final in Tokyo spurred her to regain her reputation as a global standout on the apparatus.

“After Tokyo I was a bit frustrated that I didn’t make the beam final,” she said. “I struggled with my backwards element and my routine wasn’t that stable. After the Olympics I decided to train the fearful element again because I wanted to show the world that I can do it better. Well, it worked.”

Schäfer credits Kay-Uwe Temme, her coach at KTV Chemnitz, for gradually and diligently getting her to perform her full difficulty in Kitakyushu.

“I felt much more comfortable in my routine and I really could see improvement day by day,” she said. “It really helped a lot that I could go to Kitakyushu with my new coach. I knew that I could do it and without any pressure I started to practice it again. It worked really well and I felt much more powerful to get this. My coach was always supporting me and he believed in me that I would manage it.”

Even with a full collection of world medals on her best apparatus, Schäfer anticipates changes to her routine in 2022 and beyond.

“First I have to deal with the new Code of Points and after that I will decide what really pays off,” she said. “For sure I’m open to creating a new element.”

“I will take good care of my body and my mental health, so then it is no problem to be an all-arounder until Paris,” Schäfer told International Gymnast Online.