“Every day we see world leaders and high-ranking officials visiting Kyiv and providing support to the Ukrainian President (Volodymyr Zelensky), who became a true hero for Ukrainians and a symbol of courage for the world,” Podkopayeva told International Gymnast Online. “I encourage everyone to continue sending donations to trusted organizations and support Ukrainians in any way you can.”

Podkopayeva, a Donetsk native who now lives in Georgia, U.S., cited the Ukrainian Congress Committee of America Georgia Branch (https://www.ukrainianatlanta.org/donation) among the reputable organizations to which donations can be made. She urged people worldwide to consider aid to Ukraine a humanitarian responsibility.

“Till the last moment I did not believe that this war was possible and that this ruthless attack on Ukraine will claim so many innocent lives,” she said. “Once a beautiful, peaceful country that was on its path to the brighter future, even though sometimes a very bumpy path, now is being torn by the Russian missiles. The pictures we see from Ukraine every day are heartbreaking, and it is our moral duty to help Ukraine and Ukrainian people with anything we possibly can.”

Sharipov, who since 2011 has served as the head coach of the men’s gymnastics team at The Ohio State University in Columbus, launched his own campaign to provide gymnastics supplies to Ukrainian gymnasts via online donations.

Through Sharipov’s portal on the Ignite Your Light Worldwide website (https://igniteyourlightworldwide.com/?fbclid=IwAR30iGkYv-DJcQzgFmm8NbFpd-oGvlm5rDTli9-NnHSs_SPFoN-gRTTSjhw), he has so far shipped three large box loads of grips, wrist supports, gloves, tape, vitamins and other items to Ukrainian gymnasts temporarily based in Italy.

Sharipov, who is in the process of collecting more donations for items that will be sent Ukrainian gymnasts now training in Germany, said his portal enables individual and corporate donors to directly purchase needed items on Amazon and/or make financial donations for the purchase and transport of supplies.

He is currently compiling a list of newly needed items based on regular phone and text-message contact with Ukrainian coaches and gymnasts who are training and competing outside the country.

Inspired by concerned U.S. friends and colleagues who reached out to him at the outset of the invasion in late February, Sharipov eagerly took up his own cause.

“When the war started, people in the U.S. who know me started calling and texting me and asking what they can do,” said Sharipov, who in addition to winning individual Olympic gold on parallel bars in 1996 was a member of the gold medal-winning Unified team at the 1992 Olympic Games in Barcelona. “How can I say no? I appreciate that people trust in me and my name that I’m going to do the right thing when they send money.”

Sharipov monitors the situation at home through daily contact with his parents and brother who reside near Kharkiv, site of intense fighting in the northeast part of the country.

“At the beginning they were scared,” Sharipov said. “They spent a lot of time underground. Although they don’t live close to the city, they can still hear planes and shootings and bombings. It’s hard. Every day I call my parents to make sure they’re fine. So far at least they still have internet, so I can call on Whatsapp and see their faces.”

Despite the ongoing attacks, Sharipov is hopeful that Ukraine will emerge from the war stronger. He also plans to resume staging the Rustam Sharipov Cup in Kharkiv, a competition for young gymnasts which in the previous years took place  in a gym that is now vacant and with blown-out windows due to wartime damage.

“I believe things are going to get better,” Sharipov told International Gymnast Online. “I know Ukraine is getting a lot of military support right now from around the world. One day Ukraine is going to win. We’re going to rebuild and I’m looking forward to that day, so I can go back again and have the competition for kids. That’s the plan.”

2004 Ukrainian Olympian Iryna Goncharova (the former Iryna Yarotska), who is married to 2004 Olympic parallel bars champion Valeriy Goncharov, held an online master class on April 30 as the fourth fundraiser for The Power of a Dream Foundation’s “Peace through Gymnastics” project (https://thepowerofadreamfoundation.com/?page_id=47).

Goncharova, whose master class raised $1,745, noted that the foundation is a nonprofit organization collecting donations for young gymnasts in Ukraine.

“My heart is bleeding for every Ukrainian,” said Goncharova, who now coaches in Oklahoma. “This is the least we can do. I’m very thankful to so many people around me who are providing support and helping as much as they can.”

2000 and 2004 Ukrainian Olympian Alyona Kvasha, who lives in Australia, will host an online master class on May 14 (Melbourne time), the fifth such fundraiser for The Power of a Dream Foundation’s “Peace through Gymnastics” project (https://go.rallyup.com/ptgp-alyona-k/Campaign/Details?fbclid=IwAR2w8k_X0YAc5DIAFheoqgiZoiZPxqeLGKaoKpHwrL5tC92gyO9gFshRuvI)

“We don’t have to be Ukrainian to stand for Ukraine,” Kvasha told International Gymnast Online. “I’m thinking about how I can continue to help and support the people that I know in Ukraine. How can I keep providing support to our Ukrainian gymnasts in the national team? They are also in survival move because they don’t have simple things to keep up their trainings – vitamins, tape, grips, clothes, uniforms in which to compete and so on.”

Kvasha, who co-owns and co-directs Trident Gymnastics in Ringwood, Victoria, with her husband Tim Lees, said she is also concerned for the survival of the Ukrainian gymnastics once the war ends.

“I think we have to get international sponsorship for our gymnasts,” she said. “They are going to need support even when the war will be over because the country won’t have much of a budget left for athletes. Civilians will be a top priority.”

2004 and 2008 Ukrainian Olympian Iryna Krasnyanska will host a master class on May 15, the sixth such fundraiser for The Power of a Dream Foundation’s “Peace through Gymnastics” project (https://go.rallyup.com/ptgp-iryna-k/Campaign/Details?fbclid=IwAR3FNjIoFq6xOCuxlPQwesbmfTzOpBAoUJCKP1YeRGupFjNc-Sc3Gt_-n18)

“This is one of the best examples of how every little bit of effort can be helpful to overall success,” said Krasnyanska, the 2006 world balance beam champion. “In my turn, I help the way I know how. If my experience and knowledge is something that I can offer in exchange for even a small donation, then this is what I am going to do.”

Krasnyanska, who coaches in California, said contributions of any amount are welcome and will contribute to the greater good in Ukraine.

“The amount of international support I have seen over the past two months gives me hope that together we can win and the aggressor can be stopped,” she told International Gymnast Online. “We appreciate any effort. Whether you sign up for the class, or donate any amount that you find appropriate, or spread the word, we appreciate everyone.”

Ukraine’s Daniela Batrona: ‘My parents and coaches inspired me, and God gave me strength’ 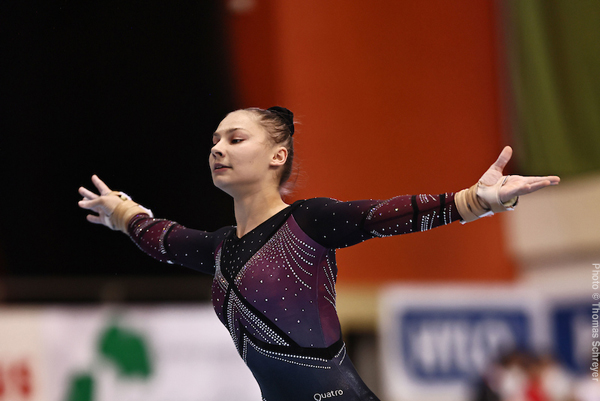 After top-four finishes on two apparatuses in the 2022 World Cup series overall rankings, Slovenian gymnast Lucija Hribar is committed to widening her target to the all-around finals at the European Championships and World Championships later this year. 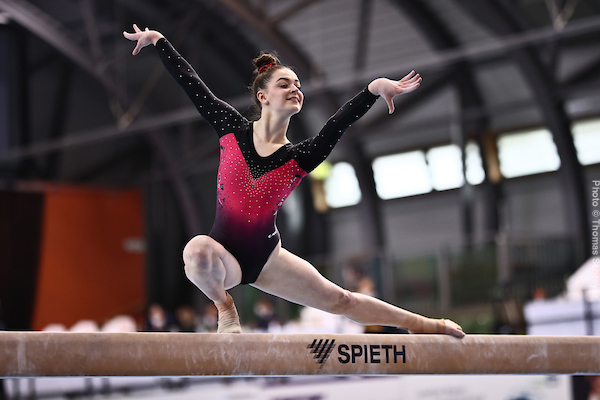 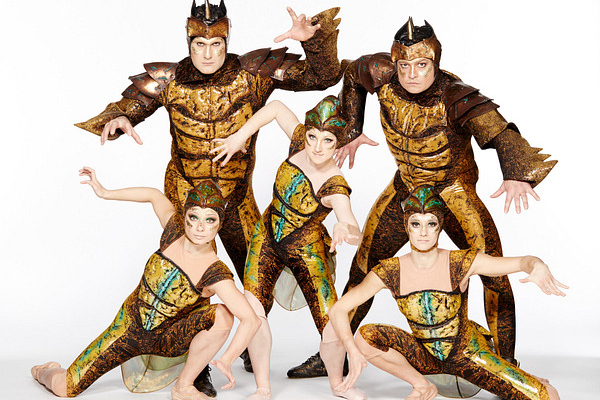 As an artistic gymnast, Nansy Damianova reached the heights of success when she competed at the 2008 Olympic Games and later won five NCAA All-American honors as a student-athlete at the University of Utah. 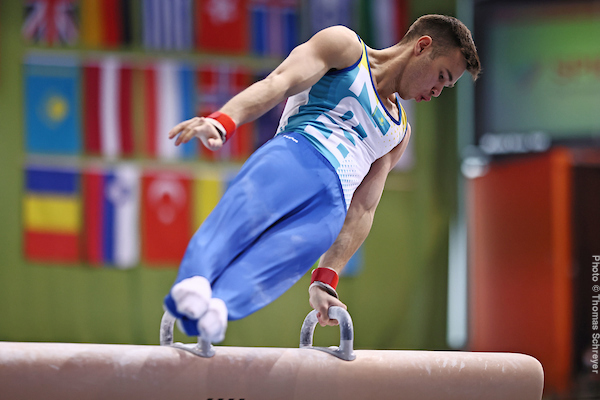 Kazakhstan’s Nariman Kurbanov earned two gold medals and the overall pommel horse title at the recently concluded 2022 World Cup series, but he plans to wield his in-progress combination of risk, execution and composure for stellar results ahead.