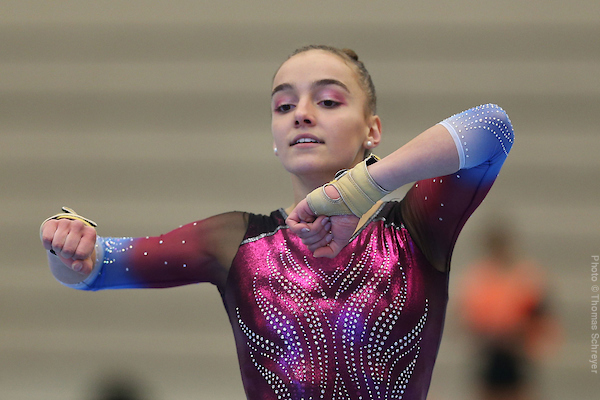 After winning two bronze medals at the Challenge Cup of Szombathely earlier this month, German gymnast Lisa Zimmermann told International Gymnast Online that her already-solid routines can be even better as the Tokyo Olympic Games approach.

“I was generally quite satisfied with my performance in the finals, especially with my floor routine,” said Zimmermann, who finished third on uneven bars, third on floor exercise and fifth on vault in Szombathely. “It was the first time I presented my new routine in competition and I am very happy that it worked out so well. On bars I was glad I came through my routine without falling in the final, but there are still some little things to improve.”

Although Zimmermann said her difficulty level in Szombathely was “already close to what I planned for this year,” she wants to boost it and show consistency in order to contend for a place on the German team for next summer’s Tokyo Games.

“I would like to increase my difficulties as much as possible and do my routines in a stable way so that I can optimally support the team in the competition,” she said.

While Zimmermann may be on the outside edge of the pack of gymnasts contending for the four spots on the German team for Tokyo, she is not exactly a newcomer.

Born February 13, 2003, in Darmstadt, Zimmermann trains at TuS 1861 Chemnitz-Altendorf, where she is coached by Gabi Frehse. “At training camps of the national team we get support from Nick Ruddock on floor and vault, and from Carol-Angela Orchard on beam,” she said. Zimmermann’s current floor exercise routine was choreographed by Inna Atazhanova.

The postponement of the Tokyo Games until next summer offers Zimmermann an extra year to refine and upgrade her routines, a bonus offset by the fact that are enjoying the same opportunity.

“I have more time to work on new elements or further improve unstable elements,” Zimmermann told International Gymnast Online. “That would be a big advantage for the improvement of my program, but of course I don’t have this advantage alone. All the other gymnasts do, too.”