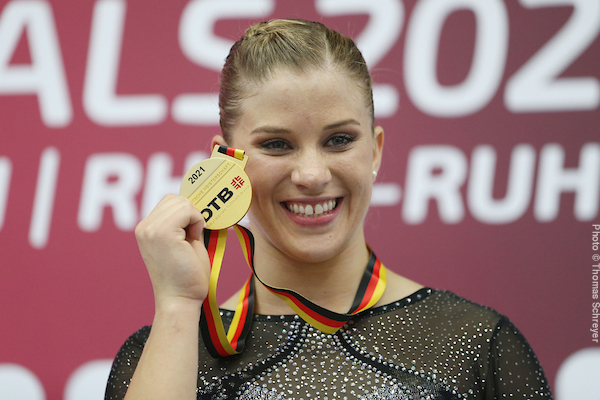 Two-time German Olympian Elisabeth Seitz’s come-from-behind all-around victory at the recent German Championships boosted her tally of national all-around titles to eight and her assortment of national titles overall to a record-breaking 23.

Moreover, Seitz’s latest triumph has lifted lifted her spirits as she vies for a spot on the German team for this summer’s Olympic Games in Tokyo.

“My goal was not only to win the German championship, but also only to qualify for the team,” the 27-year-old Seitz told International Gymnast Online of her showing at the German Championships, a German Olympic team qualification competition held June 3-6 in Dortmund. “It was a mix of both. It was about showing my best performance in order to have a great result in the end. By winning the championship, I succeeded very well and I’m very happy about that.”

Seitz had good reason to feel content, especially after dropping from first to third place when she missed flip-flop, whip combination on balance beam in the third rotation. As the last competitor on floor exercise in the fourth and final rotation, she performed cheerfully and stably to take the lead and the title by 0.10 points – a slim but satisfying enough margin.

“After my fall on balance beam, I didn’t allow myself to be confused,” said Seitz, who trains under coaches Marie-Luise Probst-Hindermann and Robert Mai at MTV Stuttgart. “The score was still OK, so I still had a chance for the title. I knew that with a perfect floor exercise, I could still fight for the title. I was in a great mood and was happy to present my exercise. So I did a great routine and won the title.”

One of 12 women who are advancing to the second German Olympic team qualification competition on June 12 in Munich, Seitz plans to upgrade from the full-twisting Yurchenko vault she performed in Dortmund, among other refinements, in order to give her ultimate performance in Tokyo.

“The most important thing for me is that I keep perfecting my exercises,” Seitz told International Gymnast Online. “What I definitely want to show at the Olympics is my double twist on vault. If I manage to improve by a few tenths on all apparatuses and, above all, get through balance beam, then I can be very confident.”