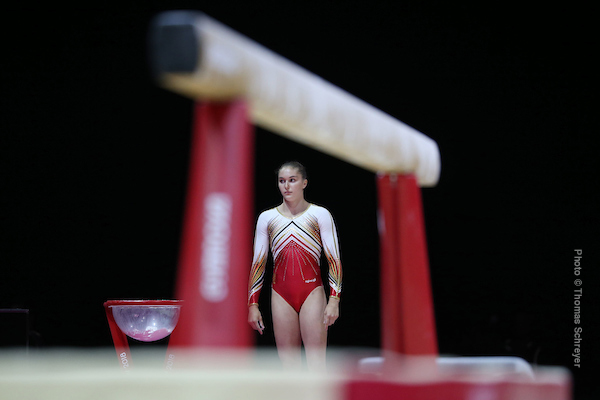 Veteran Belgian gymnast Maellyse Brassart told International Gymnast Online that two recent training hiatuses have recharged her as she adjusts her athletic and academic agendas per the pandemic-mandated postponement of the Tokyo Olympic Games.

The 19-year-old Brassart said the first of two stages of the COVID-19 lockdown was less hard than the second because she was able to continue training in the gym, and online classes have spared her the usual commute to her university.

“I had a little gain of energy since I had to travel less between the university and the gym,” said Brassart, a member of the Belgian team that finished 10th at last year’s World Championships in Stuttgart and thereby earned a team berth to Tokyo. “At that moment I was therefore really focused on my qualification for my place in the team for Tokyo 2020.”

The second stage was psychologically and logistically more taxing on her, however, after she learned the Games would be pushed to next summer.

“When I heard about the postponement of the Games, I have to admit it was a heavy blow,” she said. “So many hours of training, so many sacrifices, and then in the end my main goal for 2020 was shifted to the next year. I had a hard time getting used to it. I asked myself a lot of questions. Fortunately we had 10 days off at that time to be able to think about the future.”

Following the break, Brassart resumed her normal training on April 6. She said adapting her training and class schedules will be “very difficult but not impossible” as she views her 2020 goals in terms of their potential fulfillment in 2021 instead.

“I am going to above all have to review my plans about the level of my law studies which were the priority after Tokyo 2020,” said Brassart, who trains under coaches Marjorie Heuls (all apparatuses), Yves Kieffer (vault, uneven bars and floor exercise) and Matthieu Zimmermann (also vault, uneven bars and floor exercise). “Regarding the Games of 2021, it is above all the preparation until the Olympics which are perhaps going to be a little different compared to the year 2020.”

She credits her successful transition from junior success to senior security on her team to her June 2016 decision to begin training in Ghent, and the assets she has demonstrated since then.

“In my first year as a senior I had the chance to participate in my first World Championships in Montreal,” said Brassart, who placed 14th all-around at the 2016 European Junior Championships. “During this competition I not only acquired experience but above all I gained confidence in myself.”

Since 2017, Brassart has avoided untimely injuries and fended off enough former juniors to remain a contender for the Tokyo Games. She, team star Nina Derwael and Senna Deriks were the three members of Belgium’s 11th-place team from the 2018 World Championships in Doha who also competed in Stuttgart. The top three teams in Doha, plus nine teams in Stuttgart, earned berths to Tokyo.

“One of the things that has kept me on the team is that I was fit – no injuries – at the important moments of the year,” Brassart said. “The injuries that I have had were rather during the periods when I had no major events such as the World Championships, for example. In Doha, we had just the minimum number of gymnasts to participate. That is to say, five plus a reserve. We could not say that we had many girls to fight for our place in the team. At that time our first preoccupation was above all to qualify for Stuttgart. Then the youngest became seniors in January 2019. It was really at that moment that I could feel that, from then on, I would really have to defend my place if I wanted to be in team that would compete in Stuttgart.”

With Tokyo still in sight, Brassart has recently returned from a two-week summer holiday that she said has refreshed her for the challenges to come.

“It was a vacation rather simple because I usually try to go to another country in order to discover some new horizons, but this year, seeing the events, I preferred to stay in Belgium,” she told International Gymnast Online. “Therefore I was at the seaside for a week with my family. Even if the weather was not ideal, I was just the same able to benefit from my vacation, and I was really able to relax and recharge myself for the new season.”