Mikulak Impresses On Day One at Winter Cup 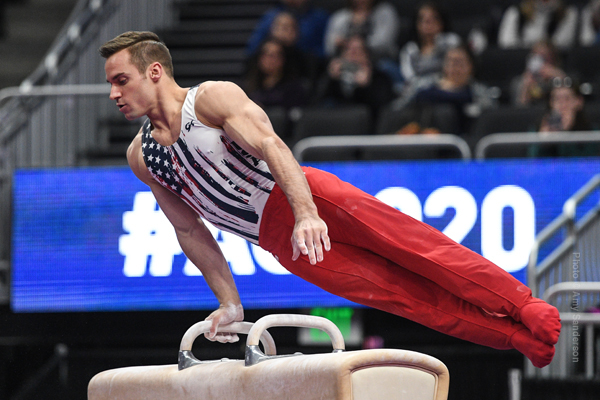 Sam Mikulak of USOPTC easily topped the field in the first day of competition at the 2020 Winter Cup Challenge held in Las Vegas, Nevada. Mikulak performed solidly on all six events and posted 86.8 in the all-around, in addition to best scores of the night on FX-14.6, PB-15.35 and HB-14.35. The only hiccup of the night for the six-time U.S. national champion came on rings where he had a shaky hold on a strength move and had to take two hops on his double twisting double tuck dismount. Mikulak finished the competition with a flawless set on p-bars where he stuck his double front half out dismount.

Shane Wiskus (Minnesota) competed cleanly start to end for the second best all-around score of the day at 84.55.  Wiskus posted the highest vault score in the competition (14.45) for his Kas 1 1/2. Brody Malone (Stanford) finished with 83.95 for the third highest all-around. Fourth was Grant Breckenridge (Stanford) 83.9, while tied for fifth were teammates Yul Moldauer and Allan Bower from Oklahoma who managed to post totals of 82.35. The top six finishers automatically qualified to the 2020 senior national team. The second day of the competition is on Saturday, February 22nd at 7:30pm PT. For full results of the competition click here.

To subscribe to the print and/or digital edition of International Gymnast Quarterly, or to order back issues, click here