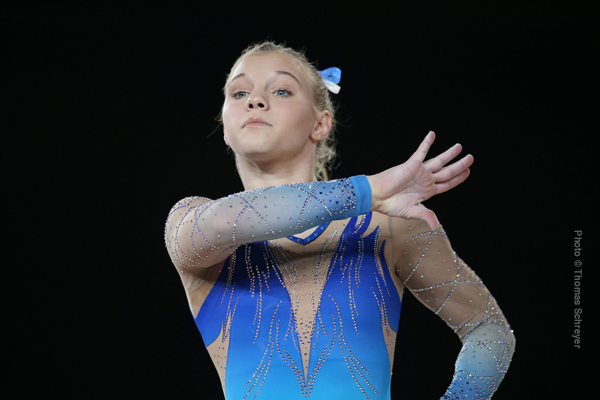 Jade Carey (USA) claimed two titles at the Melbourne World Cup, which concluded on Sunday in Melbourne, Australia. The competition was the sixth of eight editions of the FIG individual World Cup series, which serve as additional way of qualifying to this summer’s Olympics for individuals who have not yet qualified through the World Championships in 2018 and 2019.

Carey easily captured both the vault and floor exercise titles. She performed cleanly a Cheng (half on Rudi off) first vault and a double twisting Yurchenko second vault to average an impressive 14.866 for the win on the event. On floor Carey competed a full twisting double layout, double layout, sky-high double twisting double tuck third pass, and a front tuck step out to double tuck dismount to take her second gold of the weekend with a 14.366/6.0. The American leads the world cup rankings on both events and with only two events remaining in the series she is almost certain to earn an individual qualifying spot to Tokyo.

The uneven bars title was won by Diana Varinska from Ukraine who posted 13.733/5.9 for her complex routine featuring stalder-Shaposhnikova to Pak to Maloney to clear hip full pirouette, and a Tkatchev half to Jaeger. Varinska has already qualified to Tokyo through the all-around results she posted at last year’s World championships in Stuttgart. Japan’s Urara Ashikawa topped the field on beam with a 13.3/5.5 routine.

In the men’s competition Korea’s Sunghuyn Ryu claimed the floor title with an impressive routine (front double pike with a half twist, front full to triple full, 2 ½ to front double full, 1 ½ to Randi, stuck triple twist and a stuck 3 ½ dismount), which resulted in 14.933/6.5. Stephen Nedoroscik (USA) upgraded on his qualifying routine (including two on one 1080) to top the field on the pommel horse with a 15.4/6.7. Rings World and Olympic champion Eleftherios Petrounias from Greece recorded his first win of the series on the event posting 15.066/6.3.

The men’s vault was won by Korea’s Jeahwan Shin who averaged 14.866 for his Kasamatsu 2 ½ twists, and a front handspring Randi. Russia’s Vladislav Poliashov claimed the p-bar title with a 15.2/6.5 (peach, peach half, giant to one bar to Healy from one bar, Healy, Tippelt, Bhavsar, front toss, front 1 ¼ to upper arms and a stuck double front half out dismount). With the win Poliashov becomes the front-runner in the word cup rankings on the event. World and Olympic high bar champion Epke Zonderland (NED) claimed the high bar title with his signature combos: Cassina to Kovacs and Kolman to Gaylord II. The Dutch posted 14.9/6.7 for the win, which is his third one in the series and gives him the maximum 90 points in the current event rankings. The two remaining individual world cup events are in Baku, Azerbaijan and Doha, Qatar next month.