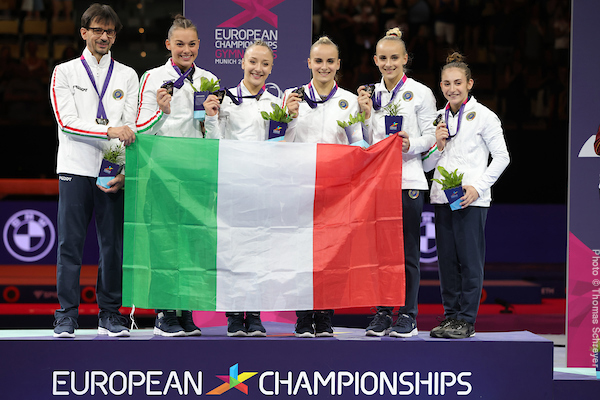 In a dominant fashion the Italian women, Angela Andreoli, Alice D’Amato, Asia D’Amato, Martina Maggio and Giorgia Villa handily won the team title at the European Championships in Munich, Germany, making it only the second European team gold for Italy, after their first sixteen years ago.

Led by the all-around champion in this competition, Asia D’Amato, Italy posted the top score on each individual event to record a dominant 165.163 for their win. “This medal is even more special for me than the all-around because I can share it with my team,” said D’Amato. “We’re such a great team, and we are so happy we’re together winning this gold.”

Italy earned a historic bronze medal at the 2019 world championships, and narrowly missed the podium at last year’s Tokyo Olympics placing fourth. With the excellent form and confidence that the Italian team displayed throughout this competition, it certainly could be considered as one of the top title contenders at this fall’s world championships in Liverpool.

Recent silver all-around medalist, Alice Kinsella, along with teammates Ondine Achampong, Georgia-Mae Fenton and sisters Jennifer and Jessica Gadirova, earned the silver medal for Great Britain with 161.164. The second-place equals the Brit’s best finishes at European championships; the other silvers were won in 2010, 2014 and 2016.

Competing in front of jubilant home crowd, Germany posted 258.430 to earned the bronze, their first ever team medal at a European championships. It was the last competition for veteran Kim Bui who had announced that she will retire after this competition. “This is just unbelievable. This is the best for me. This is so crazy, so awesome. It’s really unbelievable, I just can’t put it into words,” Bui joyously remarked after the historic accomplishment. The remaining members of the German team were Elisabeth Seitz, Pauline Schaefer-Betz, Sara Voss and Emma Leonie Malewski.

For complete results of the team final click here.