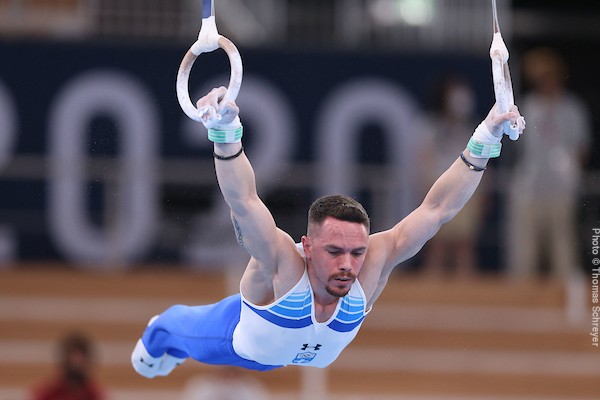 Smooth swing and rigid holds define Eleftherios Petrounias’ routine on still rings, but these attributes oppose the cluttered and arduous path to Tokyo that he cleared for himself just weeks before the start of the Games.

To earn the right to defend the rings title he won at the 2016 Rio Games, the 30-year-old Petrounias had to jump plenty of figurative hoops – or rings, in his case.

Petrounias did not place among the top three at the last world championships, and therefore had to earn enough qualifying points in the subsequent World Cup series to win a berth to Tokyo. He officially earned his Olympic spot in late June.

Even for a gymnast of Petrounias’s caliber and durability, the process was wearisome.

“Trust me, it was not easy,” said Petrounias, who won the world title on rings in 2015, 2017 and 2018. “I’ve been working a lot in Greece and here, and also just before I went up (in qualifications) on my mental training. This helped a lot.”

Above all, he said, physical preparation and patience helped him shift into title-defense mode.

“I have done so much training,” Petrounias said. “I’m freaking tired of trying to prove I deserve to be here, so it was a long period with many (Olympic qualifying) competitions. I’m super happy to be here but I’m also tired.”

Petrounias arrived in Tokyo with his usual competitive drive, but with a mindset that was drastically distinct from Rio five years ago. He and his wife, three-time Greek gymnastics Olympian Vasiliki Millousi, have two young daughters, Sofia and Eleni. They were his guiding lights toward his hoped-for repeat gold in Tokyo.

“Every moment is different, and every competition is different,” said Petrounias, who went on to win bronze. “(In 2016) I was hungry for my first Olympic title, I was thirsty for that. I was looking for, working and thinking about that goal all day long. But now, I have different things in my life. I have the goal to be back-to-back Olympic champion. It’s not easy for gymnastics and especially for rings. But I have my kids in my mind. I would love to make history here and have something to show my babies when they are grown up.”

Next up: Jade Carey of the U.S. on redeeming herself with gold in the floor exercise final after finishing last in the vault final