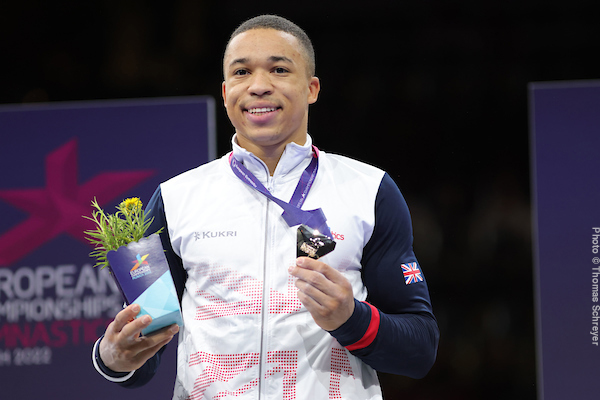 A month and a day after fracturing his right foot, British gymnast Joe Fraser stepped with poise and a bit of bewilderment to the top of the award podium as the senior all-around gold medalist at the men’s European Championships that began Thursday in Munich.

“I always said this will be my one big story one day,” said Fraser of his victory over silver medalist Ahmet Onder of Turkey and bronze medalist Adem Asil of Turkey. “I don’t know if I actually believed it. I think I liked the idea of it. I made it a reality.”

The 23-year-old Fraser’s win came soon after the Commonwealth Games held June 29-August 2 in his birth city of Birmingham, where his foot injury prevented him from competing in the all-around. He won three golds (team, pommel horse and parallel bars), but did not perform on floor exercise and vault, in Birmingham.

“It’s hard to believe that four weeks ago tomorrow I fractured my foot and was unable to do six apparatus as much as I tried to get back for the Commonwealth Games,” said Fraser, who also underwent an emergency appendectomy in May. “In hindsight I’m glad that I took myself out of that competition (for the all-around) because now I was able to do six apparatus. Maybe not quite to the best of my ability, but good enough to be European champion.”

“In the past, I would always be stressed and excited in the all-around final because of the lack of confidence and also because (of) my strong opponents,” said Onder, who qualified eighth to the all-around final at last summer’s Olympic Games in Tokyo, where a shoulder injury forced him to withdraw after three apparatus. “That made me lose points. But I have improved myself over the years. I have more confidence and during competitions I manage to keep myself calm.”

Asil said he was satisfied with his all-around bronze despite a less than stellar routine on his third apparatus, and more than satisfied with his team’s second-place ranking in Thursday’s qualifications for the team final on Sunday.

“I had some trouble today with high bar, but I kept going,” said Asil, who last year placed 15th all-around at the Olympic Games and 11th all-around at Worlds. “This is a very good day for Turkey. It really is a historic day for us. We showed everyone, the world, that Turkey is coming.”

Fraser’s all-around dominance steered Great Britain to the top of the team rankings in qualifications for Sunday’s team final. The top eight teams in Thursday’s qualifications advanced to the team final, and the top 13 teams qualified for this fall’s World Championships in Liverpool.

“We know the medals can come,” said Fraser of British prospects in Munich. “We just have to deliver the routines. We’re not focused on the end result. We’re focusing on routines. We know we can achieve things, like today.”

Joining Great Britain in the team final will be Turkey, Spain, Italy, France, Switzerland, Germany and Hungary, who ranked second through eighth, respectively.

Also advancing to Liverpool were Ukraine, Romania, the Netherlands, Belgium and Austria, who ranked ninth through 13th, respectively.

Thursday’s competition also served as qualifications for the apparatus finals that will take place Sunday.

Top qualifiers per apparatus were Fraser on pommel horse and parallel bars, Nicola Bartolini of Italy on floor exercise, Eleftherios Petrounias of Greece on still rings, Artur Davtyan of Armenia on vault and Marios Georgiou of Cyprus on horizontal bar.

Competition in Munich continues Friday with the junior team final, junior all-around final and qualifications for the junior apparatus finals.

Albania’s Matvei Petrov: ‘For gold maybe I have to be in perfect shape’

Vahagn Davtyan’s vow: ‘to work on myself more and more’

Croatia’s Mateo Žugec on first Challenge Cup medal: ‘Everything is possible in the final’

Finland’s Emil Soravuo: ‘I have to give 100% commitment to challenge the world’s best’

Great Britain’s Joe Fraser: ‘It’s been one hell of a journey’