Great Britain’s Jessica Gadirova: ‘I tried to start fresh, and that’s what I did’ 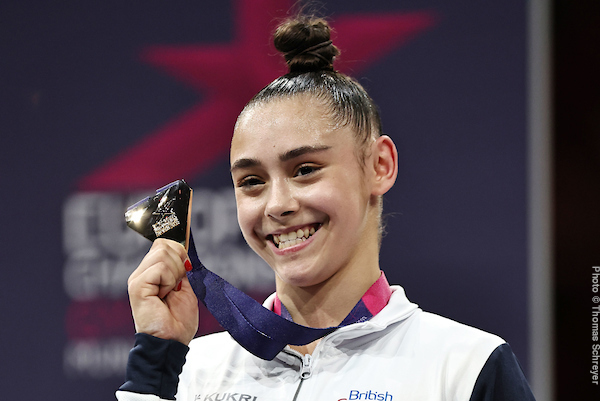 International Gymnast Online flashes back to last month’s European Championships in Munich with this vignette on Great Britain’s Jessica Gadirova, who seemed astounded by her successful defense of the floor exercise crown she won two years ago.

“I’m in a bit of a daze,” said Gadirova after she took gold on floor exercise in the apparatus finals on August 14. “I’m shocked to have retained my title and, to be honest, it hasn’t really sunk in.”

A fifth-place finish in the vault apparatus final earlier in the day fueled Gadirova to perform at her best in her last routine in Munich.

“I was quite disappointed about the vault, where I did not get the result that I wanted,” said Gadirova, who will turn 18 on October 3. “There was a big challenge in front of me to pick myself up. I wiped it away and thought, ‘I have another final, another chance to redeem myself’. I tried to start fresh in the floor final and that’s what I did. It came with the gold, which I am very pleased of.”

“As I stepped onto the floor, all I thought was it will be my last floor routine with this floor music, and I wanted to give it my all,” she said. “To hear the crowd cheer for me when I did my tumbles and my dance was amazing.”