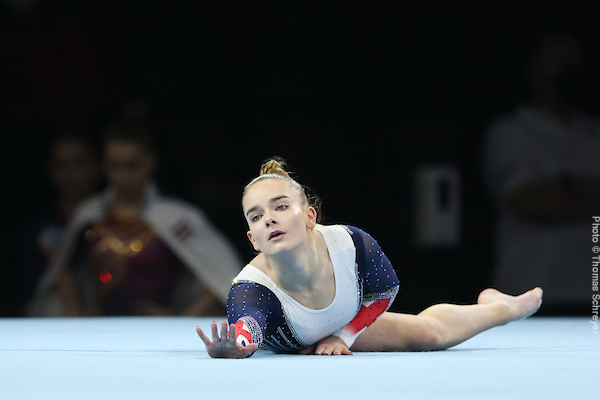 When British gymnast Alice Kinsella dismounted uneven bars in the last rotation of the team final, she sensed her team’s trio of performances on the apparatus may just have been good enough to land them on the medal podium.

“I had a little feeling that we might have actually got a bronze medal, and I was just happy I did a clean competition,” said Kinsella, whose instincts proved right as the British women came from behind to win bronze, their first Olympic team medal since 1928. “It was one of my best competitions ever and that was the best bars routine I could ever do.”

Kinsella said she and her teammates were determined to dismiss Amelie Morgan’s fall on balance beam in the first rotation and continue confidently, a mindset which transferred into solid routines and culminated with a trio of bars performances that pulled them into third place

“We put that behind us,” Kinsella said. “I went up on beam and did a good routine. Floor, we smashed it. Vault, we smashed it. Then I kind of looked at the (scoreboard) and was like, ‘OK, we might have a chance to get a medal.’ So I went to bars and told myself, ‘I’m going to do the absolute best bars routine I could ever do’. I came away with a personal best.”

Bronze notwithstanding, Kinsella’s jubilation reflected her thrill in sharing the experience with teammates Morgan, Jennifer Gadirova and Jessica Gadirova.

“We were going in just to enjoy it and get the experience of an Olympic team final,” Kinsella said. “Obviously we did enjoy it a lot, and to come away with a medal feels absolutely magic.”

Next up: Vault medalist Artur Davtyan of Armenia, on the difference between gold and bronze