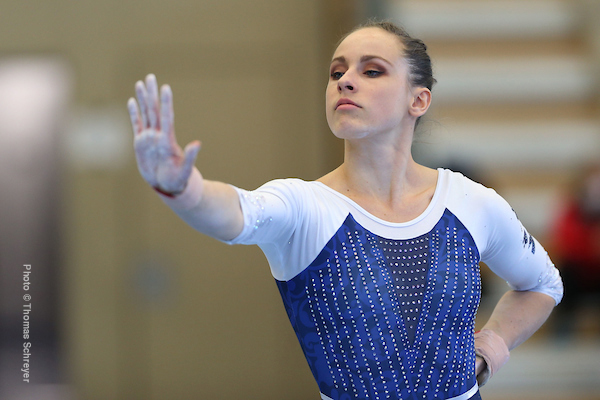 Olympian Sarah Voss of Germany told International Gymnast Online that her gold medal-winning performance on balance beam at last weekend’s World Cup of Baku was an exercise in determination.

“My qualifications routine had a few major errors in it,” said Voss, a member of Germany’s ninth-place team at last summer’s Olympic Games in Tokyo. “For example, my gymnastic jump was not completely turned around, which ended up in a 0.10 less D(ifficulty)-score. In addition to that I had two serious wobbles which ended in a deduction in my execution score. In my final routine I wanted to improve on those issues, and it worked out very well.”

The 22-year-old Voss said her 2022 floor exercise routine is a work in progress, and hence was the only event on which she did not compete in Baku.

“I still want to improve a lot more in my acrobatics and gymnastics, which takes time,” said Voss, who finished fourth in the uneven bars final and 13th in vault qualifications. “In addition to that I had a little issue with my foot which made me unable to train this apparatus properly.”

“My balance beam is pretty much the same,” Voss said. “I changed the mount for a higher D-score but overall this routine is the same as at the Olympics. My bars routine is yet not finished but there will hopefully be a lot more improvements by August. For now my D-score is at 4.8 and I want to improve it by a point to 5.8. On floor, as well as on bars and beam, there will be a bonus for a D-element on the end of the routine, which I am striving to do so. Also I want to improve some of my acrobatics and increase my D-score too.”

With such enhancements to her routines, Voss anticipates potentially high all-around results.

“Overall I hope this will result in a good and internationally competitive all-around program,” she told International Gymnast Online.