France’s De Jesus Dos Santos: ‘I Have To Work Hard To Realize My Goals’ 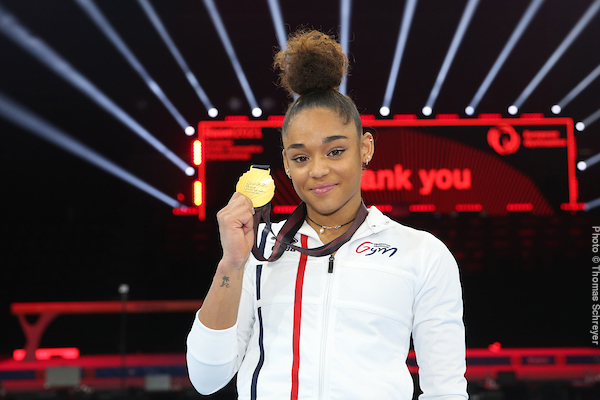 Although French gymnast Mélanie De Jesus Dos Santos did not attempt to defend her all-around title at last month’s European Championships in Basel, she told International Gymnast Online that her victory on balance beam there marked an important milestone on her way to this summer’s Olympic Games in Tokyo.

“I didn’t necessarily feel that extra pressure but I had to finish this competition on something good, especially after missing the uneven bars qualification,” said De Jesus Dos Santos, who competed on only uneven bars and balance beam in Basel. “My first goal was to qualify for the beam final so that I could get my new dismount, and then in the final, I obviously wanted to hit all my skills one by one on the beam first, and then make the dismount to upgrade my D(ifficulty) score.”

Sixth in balance beam qualifications, De Jesus Dos Santos performed much more steadily in the final, where she dismounted with a full-in for the first time and bettered her D-score in qualifications of 5.4 to 6.0 points. She scored 13.90 to win the gold medal, above 2016 Olympic balance beam champion Sanne Wevers of the Netherlands, who earned the silver medal with 13.866. Ukraine’s Anastasia Bachynska took the bronze medal (13.333).

De Jesus Dos Santos, whose D-score was 0.40 higher than Wevers and Bachynska (5.6 each), said meticulous preparation produced her sure-footedness performance in the final.

“During training at Europeans, I was focused more on landings, and I think that’s what helped me to be able to be very steady on the beam,” said De Jesus Dos Santo, who finished first all-around, first on floor exercise and second on balance beam at the 2019 Europeans in Szczecin. “But it is also because of the numerous training sessions in Saint-Étienne where I trained my routine. Every single day, I used to do a lot of specific drills to strengthen my ankles.”

Eric Hagard, De Jesus Dos Santos’s coach, was the first to congratulate her as she jumped down from the podium.

“I told her that performing such a difficult dismount for the first time in competition was a good thing to do,” Hagard said. “I said, ‘We knew that it wasn’t quite ready but trying hard as you did was very courageous and challenging. I’m really proud of you.’”

Hagard said the decision to limit De Jesus Dos Santos to just two events is Basel was part of their deliberate pacing towards Tokyo.

“We decided not to compete all-around in Basel because Mélanie’s first plan was the (now-canceled) Tokyo World Cup in May,” Hagard said. “To anticipate her return to competition in three weeks, it was safer to only do the two apparatus she was most in control at this time of the season. On the other hand, we upgraded both routines, and this competition was a very good opportunity to compete with those more difficult routines.”

Hagard said that, with a satisfying performance in Basel behind them, he and De Jesus Dos Santos will resume their training momentum to produce a peak all-around performance in Tokyo.

“We will work on her consistency on bars and improving the quality of her beam dismount,” Hagard said. “We normally will upgrade her floor routines to challenge the best gymnasts for the all-around. And most important, keeping her healthy until Tokyo.”

The 21-year-old De Jesus Dos Santos agreed with Hagard, noting that she needs to improve her Execution scores on all apparatus and intends to upgrade her D-score on floor exercise from 5.7 to 6.1.

Despite her recent continental conquest on balance beam, De Jesus Dos Santos still considers herself an all-around gymnast who can also contend for medals on one or more apparatus in Tokyo.

“Basically, I am an all-arounder, so for me the best medal would be in the all-around final,” she told International Gymnast Online. “But if I keep working well on beam and floor I could get a medal on both apparatus. First of all I have just to qualify for those finals and we will see, but once again I have to work hard to realize those goals.”