Dutch history-maker Naomi Visser: ‘It felt like a victory for me’ 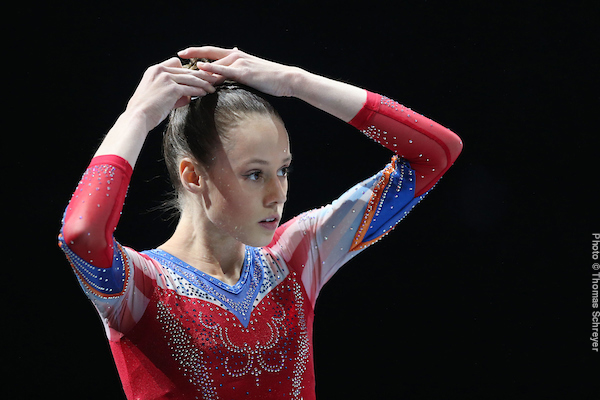 “The preparations for these worlds were not easy, so I was happy I got the chance to go there in the first place,” said Visser, who finished fifth all-around at the Worlds held in Kitakyushu two months ago. “My goal was to have a stable competition and make it to the all-around final. When I made the all-around final, it was my goal to be in the top 10. It felt like a victory for me, because it wasn’t easy to get there.”

Visser’s landmark achievement in Kitakyushu compensated for the letdown she experienced prior to last summer’s Olympic Games in Tokyo.

Slated to travel to the Games as first reserve on the Dutch team, Visser tested positive for COVID-19 only weeks prior to departure for Japan and remained home.

The 20-year-old Visser said a circle of confidants enabled her to process and diminish the frustration she felt over missing Tokyo.

“I learned with help from people around me, especially my coach, to deal with setbacks,” said Visser, a Papendrecht native who trains under coach Vincent Wevers at Topsport Noord in Heerenveen. “I tried to find a new motivation to work for, and that helped me.”

Although Visser’s all-around finish in Kitakyushu set a new standard for the Dutch women in world all-around rankings, she said it was not her ideal showing.

“When I reflect on my performance, the highlight for me is that I didn’t have big mistakes in both competitions (qualifications and final),” she said. “I think I could have done better on all the apparatus, but I didn’t lose that many points. I am the most happy about my combination on bars that succeeded.”

Visser said the new Code of Points in effect from 2022 through the 2024 Games in Paris is encouraging her to make some key revisions to her all-around program.

“I hope I can get a D (level) dismount on beam and floor, and some new connections on bars, beam and floor will be nice,” Visser said. “Vault isn’t my best apparatus but also I hope I can upgrade it as well. I have to look to the details of the new Code first. I’m working on my difficulty on each apparatus. By the time the competitions come, I have to make sure my routines are steady. I hope that’s enough to be in the team.”

Outside the gym, Visser is enjoying the last week of 2021 celebrating the holidays with loved ones.

“I’m spending Christmas with my family, with good food, good talks and some good board games,” she said. “On New Year’s Eve I’ll be with friends, celebrating that the new year is coming.”

Visser’s resolutions for the new year include fortification of her program, and success at the European Championships in Munich in August and Worlds in Liverpool in October.

“In 2022, I hope I can have a good training period and upgrade my routines,” she told International Gymnast Online. “My goal is to go to the Europeans and Worlds. I hope we can make the top eight with our team at Europeans, and for me personally I hope I will make it to two finals. And of course, to stay fit and healthy.”

Thorsdottir on quarantine: ‘Time to get even better than I was before’

Egypt’s Mohamed: ‘I Hope To Be At My Very Best In Tokyo’