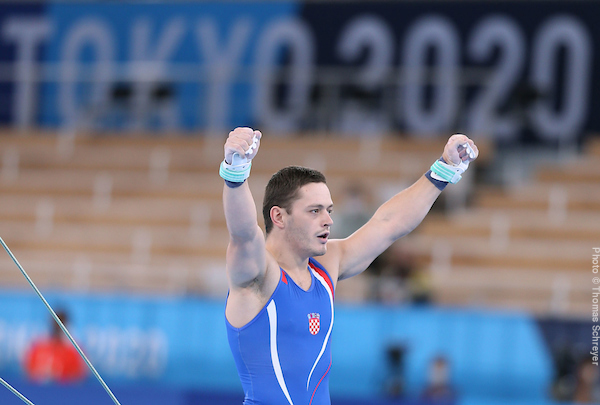 Croatian gymnast Tin Srbic’s fearless instinct prevailed as his risky last-second decision to bump up his difficulty score paid off in silver in the horizontal bar final.

Srbic, the 2017 world champion and 2019 world silver medalist on horizontal bar, was set to compete a 6.2 difficulty score until the moment before he mounted the apparatus as the sixth of eight competitors.

“Since the qualifications I planned to go for a stronger routine,” he said. “I wanted to go for 6.5 and I thought, ‘I won’t look at the others, I don’t care about the others, I am going all in.’ But I saw the other gymnasts falling down and making some mistakes. Then I saw 14.5(33) was the gold medal position (after the first five competitors). That is a score I could get even with a lower start value.”

The instant Srbic saluted the judges to start his routine, however, his competitive drive overpowered his calculated compromise.

Srbic made the most of his choice to perform a routine with a 6.5 difficulty score for a comfortable second-place finish (14.900), behind gold medalist Daiki Hashimoto of Japan (15.066) and ahead of bronze medalist Nikita Nagornyy of the Russian Olympic Committee (14.533).

Perplexed yet content, Srbic reflected on the relative significance of his achievement in Tokyo.

“When I landed I thought, ‘Is this real? Can it really be an Olympic medal?’” he said. “Just to make the (Olympic) final, in my head, was even more than becoming a world champion. And now I have a silver medal. I can’t even compare it to anything else.”

Next up: Brazil’s Rebeca Andrade on shining her way to all-around silver and vault gold