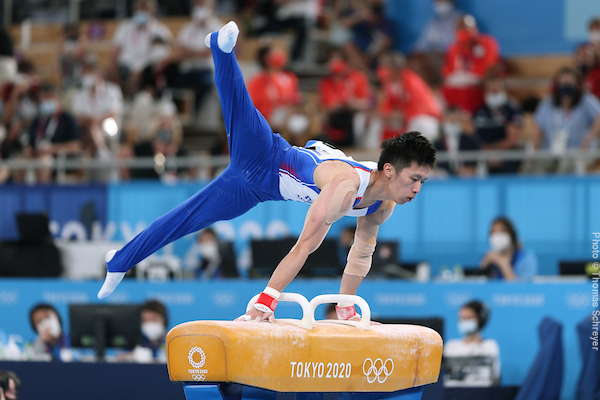 Although Chinese Taipei gymnast Lee Chih Kai’s current best was not good enough for gold on pommel horse, he reflected on silver with succinct satisfaction.

Lee’s trajectory toward gold halted in the Tokyo final, where defending champion Max Whitlock of Great Britain prevailed with a score of 15.583. Lee’s 8.70 execution score was the best in the field, but he ceded 0.30 to Whitlock in the difficulty score and finished second with 15.400. Kaya Kazuma of Japan was third with 14.900.

Heading into the final as the top qualifier, Lee said he relied on his teammates and coach to help fortify his self-confidence.

“I got a fist bump from my teammates and told myself, ‘I can do this,’ said Lee, who placed 21st in the all-around final four days earlier. “I asked my coach, ‘How do you think I will perform today?’ He said, ‘Fine.’ So I said, ‘As long as the coach thinks I’m fine, I will be fine.’”

Silver secured, Lee said his best performances are ahead.

Next up: Jamaica’s Danusia Francis on the knee injury that almost sidelined her, and her side hustle as a stunt performer