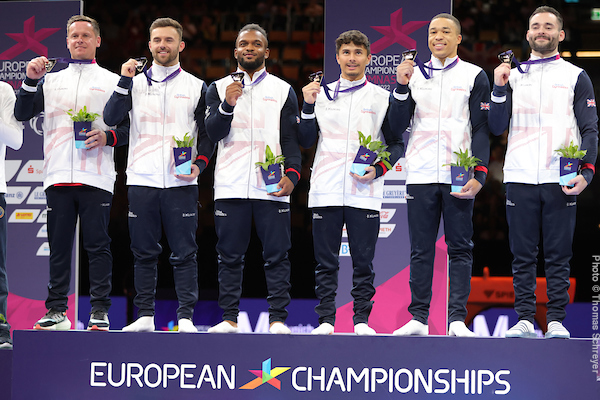 By a winning margin of nearly seven points, the British men joined forces to earn gold in the senior team final at the men’s European Championships that continued Saturday in Munich.

“Today we really pulled together,” said British gymnast Joe Fraser, who won all-around title earlier in the championships. “We had our struggles in the last few days, but the way we just pulled together on each and every apparatus makes us a different kind.”

James Hall, Jake Jarman, Giarnni Regini-Moran and Courtney Tulloch rounded out the victorious British squad. Fraser, Hall and Tulloch were also part of the silver medal-winning British team at the 2018 Europeans in Glasgow.

Fraser praised the steely performances by Tulloch, who suffered an allergic reaction on Saturday night.

“He looked like he had a boxing match,” said Fraser of Tulloch, who earned the field’s second-highest score on still rings and its fourth-highest score on vault. “That was how much his face had swollen. So to deliver the routines he did today shows the kind of character he has.”

Fraser referred to his team’s victory in Munich as “the start of something good” on the approach to this fall’s World Championships in Liverpool.

“We are really excited for the future,” said Fraser, the only British gymnast to compete on five of the six apparatus in the team final. “We have the world championships in a few months, so we keep pushing and see what we can achieve.”

Bartolini said team silver in Munich is even brighter than the floor exercise gold he won at last year’s World Championships.

“This is the most important medal for me,” he said. “Even better than the World Championships medal, because it’s for the team. We have been working for this for years.”

Bronze medalist Turkey could have challenged Italy for second place if not for problems on pommel horse and horizontal bar.

The highest-scoring gymnasts per apparatus in the team final were Jarman on floor exercise, Nils Dunkel of German on pommel horse, Asil on still ring and vault, Lukas Dauser of Germany on parallel bars and Hall on horizontal bar.

Albania’s Matvei Petrov: ‘For gold maybe I have to be in perfect shape’

Vahagn Davtyan’s vow: ‘to work on myself more and more’

Croatia’s Mateo Žugec on first Challenge Cup medal: ‘Everything is possible in the final’

Finland’s Emil Soravuo: ‘I have to give 100% commitment to challenge the world’s best’

Great Britain’s Joe Fraser: ‘It’s been one hell of a journey’