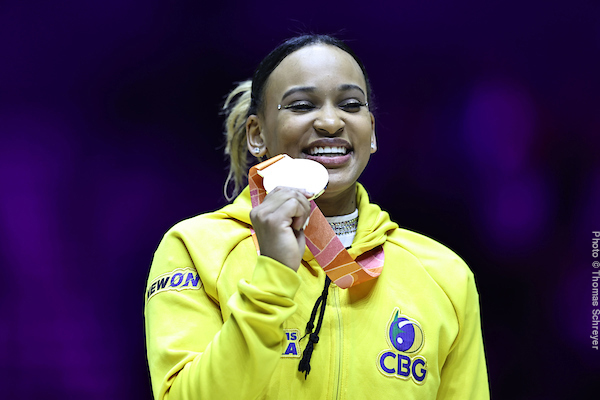 In another historic night in Liverpool, sensational Rebeca Andrade captured the world all-around title, the first one for her country Brazil, and the first one ever for a Latin American gymnast.

Andrade, Tokyo Olympics all-aruond silver medalist, and world and Olympic vault champion easily outscored the rest of her peers to win her first world all-around title with a score of 56.899. Andrade began the competition with an outstanding vault, a Cheng, which received a 15.166, the highest score of the entire competition.

But in her bar routine in the second rotation things didn’t go perfectly. On a missed cast to handstand, the 23-year-old had to be quick and fight hard to save a major break or even a fall. “I don’t know exactly what I did, but I know my routine and what I need to do, so I thought fast and just continued”. The Brazilian pushed her cast to handstand over and had to improvise with a pirouette to a giant half to avoid the major break.

Andrade, who took the lead after the first event and never relinquished it throughout the final, was precise and confident on her beam routine for 13.533 and clinched the gold with an immaculate floor routine which received 14.400. “I did my beam routine with all the connections and all the difficulty, and that was one of my best floor routines ever. I’m so proud of myself”, Andrade also said.

Andrade’s gold medal is only the second medal in the all-around for a Brazilian gymnast, after Jade Barbosa’s bronze in 2007. She also becomes the first Latin-American gymnast, male or female, to win the world all-around title.

Shilese Jones from the U.S. navigated through her competition with confidence and assurance to earn the silver medal with 55.399, her first individual medal from a world championship. “It means the world to me. I’ve been on this journey for a really long time now, and I’m super-proud of my gymnastics and my skills.” Jones posted the highest bars score of the evening with 14.366.

Jessica Gadirova was near perfect in her all-around performance to earn the first every all-around medal for Great Britain with a score of 55.199.  “I’m speechless, I have no words to say. I’m over the moon and so happy”, Gadirova said.

Alice Kinsella, also of Great Britain placed fourth with 55.065. “Coming fourth is probably one of the proudest moments of my life. My last Worlds in 2019 I did do the all-around final, and I placed 14th, so now saying to myself I came fourth, I couldn’t be more proud of myself.”

Performing cleanly throughout their all-around competitions, Canada’s Ellie Black and Jade Carey from the U.S. placed fifth and sixth. They were followed by Ou Yushan from China and Shoko Miyata of Japan who were 7th and 8th.

For complete results of the all-around competition click here.