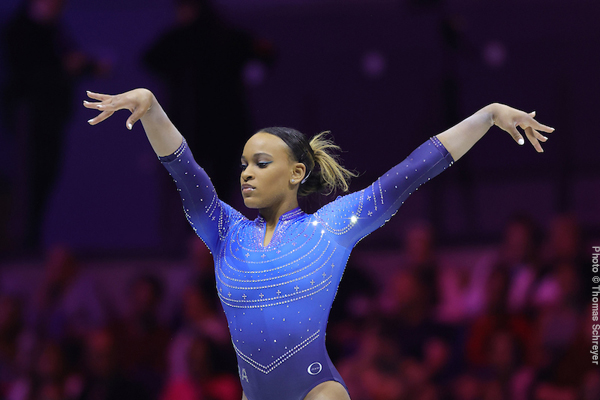 Already the top qualifier for Thursday’s all-around final at the World Championships in Liverpool, Rebeca Andrade of Brazil reflected with gratification on her team’s fourth-place finish in Tuesday’s team final.

“We are very happy with the result because it is the best result ever for Brazil as a team,” said the 23-year-old Andrade. “I am very proud of the team tonight.”

Andrade heads into Thursday’s all-around final as the favorite for gold after scoring 57.332 points in qualifications to handily top the standings. U.S. gymnasts Shilese Jones (55.766) and Jade Carey (55.132) qualified second and third, respectively, to the final.

Entering the first world championships all-around final of her career, Andrade is the the field’s highest-ranked women’s all-around finisher from last summer’s Olympic Games in Tokyo, where she won all-around silver.

Andrade placed first on vault, second on uneven bars and sixth on balance beam at last fall’s Worlds in Kitakyushu, but did not compete in the all-around there.

Born July 26, 2002, in Seattle, Jones was a member of the gold medal-winning U.S. team at the 2018 Senior Pan American Championships in Lima, the 2019 and 2022 City of Jesolo Trophy competitions in Italy, and the 2020 Friendship and Solidarity competition in Tokyo. Earlier this year Jones won gold on uneven bars and silver on floor exercise at the World Challenge Cup of Paris.

The top three teams in Liverpool have earned berths to the 2024 Olympic Games in Paris, for which Jones said she and the other U.S. gymnasts are already priming.

“We’re all capable of doing big things and more,” Jones said after the team final. “This is the beginning of everybody’s comeback career. Just wait and see. I’m super proud and I know we’ll be able to hit something big in 2024.”