Armenia’s Davtyan on world vault gold: ‘It is thanks to our coaches and our unity’ 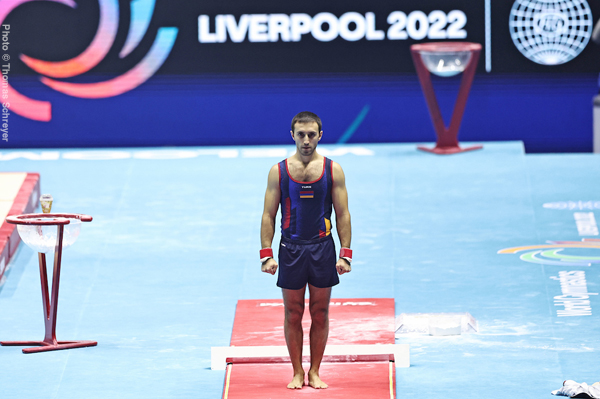 Olympic vault bronze medalist Artur Davtyan of Armenia continues to launch his country higher in the global standings, most recently through his gold medal-winning performance at the World Championships in Liverpool earlier this month.

In the November 6 vault final – one day after his teammate, Harutyun Merdinyan, won bronze on pommel horse – Davtyan achieved his Armenian landmark on the global gymnastics stage.

“Since the fall of the Soviet Union this is the first gold for Armenia in a world championships,” said Davtyan, whose two-vault average score of 15.05 points sent him above silver medalist Carlos Yulo of the Philippines (14.95) and bronze medalist Igor Radivilov of Ukraine (14.733). “We got third on pommel (horse) and now we have gold.”

The 30-year-old Davtyan credited his victory in Liverpool to expert training and teamwork.

“It is thanks to our coaches and to our unity,” said Davtyan, whose older brother, Vahagn Davtyan, placed first overall on still rings in the 2022 World Cup series. “We have been through a lot of difficulties and we’ve been working hard to try and improve continuously. Thankfully, we were able to achieve this gold medal.”

Born August 8, 1992, in Yerevan, Davtyan first made Armenian gymnastics history at last summer’s Olympic Games in Tokyo where he won independent Armenia’s first Olympic gymnastics medal – bronze on vault. He was 15th on vault at the 2012 London Games and 11th on vault at the 2016 Rio Games. A three-time European Championships medalist on vault, Davtyan’s world championships best vault result prior to Liverpool was seventh in 2018.

Davtyan’s accolades extend beyond his vaulting prowess, however. Among his other top results, he won gold on pommel horse at the 2021 European Championships in Basel and finished ninth all-around at the 2018 Worlds in Doha.

Although the Armenian team has access to good doctors, Davtyan said, the lack of physiotherapists or medics working with the team means “we have to self-medicate and look after ourselves.”

Davtyan’s victory in Liverpool showed that the challenges which Armenian gymnasts face are surmountable, even when their potential triumphs have been delayed as a result, he said.

“The most important thing is to avoid injuries, to try to stay healthy and compete uninjured,” Davtyan said. “Unfortunately, in Armenia there are not very good conditions. We have no training centers or facilities. If it wasn’t so hard maybe we could have achieved this earlier.”