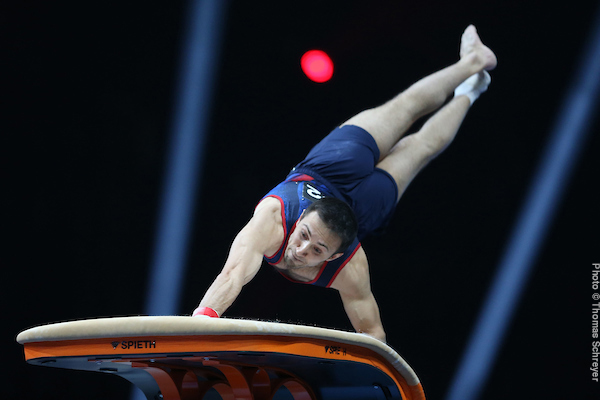 With this vignette on vault bronze medalist Artur Davtyan of Armenia, International Gymnast Online continues “Tokyo Takeaways,” a series of flashbacks featuring behind-the-scenes quotes from personalities at the recent Olympic Games in Tokyo.

Artur Davtyan became independent Armenia’s first Olympic gymnastics medalist when he placed third on vault, but he admits gold would have been in his reach with firmer landings.

”All of my competitors were very strong, and the start value for all of us was very strong,” said Davtyan, the first Armenian gymnast to win an Olympic medal since Eduard Azarian, representing the Soviet Union, won team gold at the 1980 Games. “The landings basically decided everything for us.”

Just 0.05 points separated Davtyan from gold medalist Shin Jeahwan of Korea and silver medalist Denis Ablyazin of the Russian Olympic Committee, both of whom averaged 14.783.  A tie-breaking rule gave Shin the edge over Ablyazin.

The nonetheless pleased Davtyan pondered what might have been and what might be in future vault finals.

“In qualifications one of my vaults was better and I stuck the landing,” Davtyan said. “If I could just have repeated the same stuck landing from the first day I could have won gold, so I’ll be working on that.”

Next up: Triple medalist Angelina Melnikova of the Russian Olympic Committee, on Simone Biles, winning team gold and what she considered the mystery of the all-around final