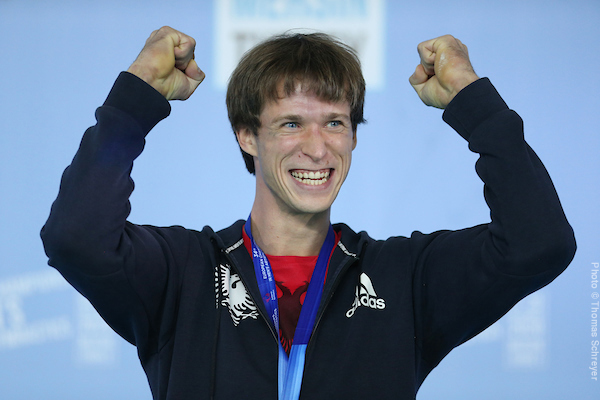 Albania’s Matvey Petrov told International Gymnast Online his history-making, gold medal-winning performance at the recent European Championships in Mersin was also a triumph over his nerves.

“Yes, the pressure was quite big,” said Petrov, who became Albania’s first European champion when he placed first on pommel horse at the Europeans held December 9-13. “In qualifications, it was much harder for me to handle the pressure because I wanted very much to get to final. But, in the final, everything was different. I felt my body was completely under control and I truly enjoyed the competition.”

The 30-year-old Petrov placed sixth in qualifications with score of 13.566 that included an 8.366 Execution score and 5.2 Difficulty score.

On the final, owing to a substantially higher D-score, he improved his qualifications score by a full point to better silver medalist Filip Ude of Croatia by just 0.033 points for the gold medal.

Petrov’s score of 14.566 in the final included a D-score of 6.0 that he said could have been far higher had his routine gone according to calculations.

“Originally we were planning to make an even harder routine, with a difficulty of 6.5, but in qualifications I wasn’t ready to do this,” he said. “In the final, I felt ready, but I made a mistake on the dismount, so I lost 0.3 points of difficulty. Otherwise my difficulty would have been 6.3 instead of 6.0. Also, I didn’t show the originally planned ‘American traveling,’ so (I lost) another 0.2 points in the D-score.

Although Petrov slightly balked on his handstand dismount that normally includes a pirouette, he said he was otherwise pleased with his performance.

“I would say that my routine in final was very clean,” he said. “I made a big mistake only on the dismount.”

Petrov’s landmark achievement for Albania is the latest milestone on the revival of his career that began and initially ended in his native country of Russia.

Born July 16, 1990, in Seltso, a town just over 400 kilometers southwest of Moscow, he and his family moved to Kaliningrad shortly after his birth. He won three Russian national titles on pommel horse and placed seventh on pommel horse at the 2013 World Championships.

Petrov ostensibly retired after he did not make the Russian team for the 2016 Olympic Games but rekindled his competitive career when he moved to Prague and began coaching.

Pandemic-related safety considerations mean Petrov is spending the holidays in Prague, where he still trains.

“I will be in the Czech Republic with my girlfriend,” he said. “Unfortunately the current situation does not allow me to go to Russia to be with my family.”

Petrov’s year-closing European conquest has incentivized him for new opportunities to come in 2021.

“It helped me a lot,” Petrov told International Gymnast Online. “I actually understood that with my routine, if well performed, I can earn big awards. Also, I am of course very motivated to keep competing.”