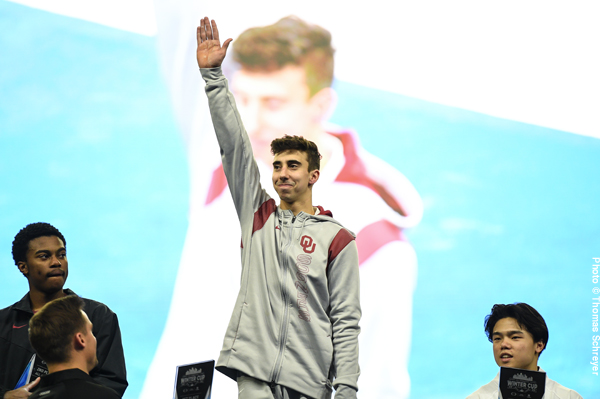 When 21-year-old U.S. gymnast Vitaliy Guimaraes won the all-around title at the recent Winter Cup in Frisco, Texas, he vaulted one success closer to his goal of competing at the Olympic and world championships levels.

Guimaraes’ score of 83.95* at the Winter Cup, a February 25-27 qualifying event for this summer’s U.S. Championships, earned him a spot on the U.S. national team and placed him ahead of silver medalist Khoi Young (83.536) and bronze medalist Asher Hong (83.029). Yul Moldauer, who competed at last summer’s Olympic Games in Tokyo and finished fourth all-around at last fall’s World Championships in Kitakyushu, was fourth with 81.648.

Born May 18, 2000, in Dallas, Guimaraes has made steady and diligent headway in the junior and senior U.S. rankings. He trained at 5280 Gymnastics in Colorado prior to enrolling at the University of Oklahoma, for which he has been competing since the 2018-2019 NCAA season. His Russian mother, Tatiana Kondratova, is a gymnastics coach who competed for the Soviet Union in the 1980s, and his Brazilian father, Marcelo, was a gymnast and coach.

With an eye on this fall’s World Championships in Liverpool and eventually the 2024 Paris Olympic Games, Guimaraes shares his thoughts in this International Gymnast Online interview.

IGO: Having placed ninth at the Winter Cup a year ago, what do you feel contributed the most to your major improvement at this year’s meet?

VG: I would say it was my mentality going into the meet. Last year I was kind of like, “I really want to make the national team,” and it worked out. But this year I walked in like, “OK, I’m just going to do what I can, especially with the whole situation (broken nose) the month before. I’m just going to go out there and try my best and hope that I can at least be in the running to make the national team.” And so it all worked out.

IGO: What is your perspective on outscoring Yul Moldauer, and how much does this boost your confidence heading into the U.S. and World Championships later this year?

VG: I have no shade, no hate against Yul or anything. I respect him, but it was cool just knowing I can reach those higher-level guys. I’ve always looked up to Yul, and he’s always been an idol of mine and a role model. Having that experience and that moment was really cool, and definitely gave me the confidence and motivation to keep working hard, and try to reach that world championships level and Olympic level eventually.

IGO: What do you think you will need to earn a spot on the U.S team for this year’s Worlds, as an all-arounder? Or, if you feel your best shot is as a specialist on one or more apparatuses, on which apparatuses do you feel you can contribute the most to the team?

VG: I know it would be really hard to try to make the world team as an all-arounder, because a lot of strong all-arounders are on the U.S. team, and they have a start-value advantage over me. But I’m not going to be sticking to the same routines I’m doing right now. I’m going to constantly be working to upgrade my routines on every event, and try to bump up my start values so I can be on the same level as those all-arounders. If I do go in as a specialist, I think I would be able to contribute on floor, potentially pommel horse maybe in the near future, vault and high bar.

IGO: Between now and the U.S. Championships, what will be the focus of your training?

VG: Right now we’re in the middle of an NCAA season, so my main focus is to finish out the season strong with the guys, with the team. And after that, let my body rest a little bit and then start working upgrades so I can bump up those start values, so I can potentially compete to be on a world championships team.

*Per USA Gymnastics, “scores were highly impacted by a new bonus-point system implemented by USA Gymnastics’ Men’s Program to incentivize higher-difficulty skills within the new FIG Code of Points, which will govern scoring through the 2024 Paris Olympic Games. Winter Cup is the first competition to utilize these bonuses.”

Mikulak: ‘It’s really cool to see first-timers shine like that’

Mikulak shows ‘power to get through this’ on first day of U.S. Olympic Trials

‘Tokyo Is The Plan’ For Comeback-Launching U.S. Gymnast Brandon Wynn