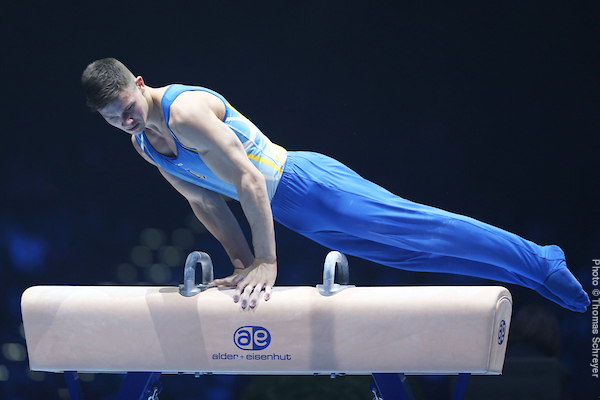 In an exclusive interview with International Gymnast Online, Ukrainian gymnast Illia Kovtun shares his thoughts after he became an unwitting symbol of resilience and dignity atop the victory podium at last week’s World Cup of Doha, where he won gold on parallel bars.

To Kovtun’s lower left on the podium, bronze medalist Ivan Kuliak of Russia sported a jersey adorned with “Z” – a symbol emblazoned on military vehicles in Russia’s invasion of Ukraine and which also is thought by some to represent the expression “For victory.” That one-letter display sparked controversy and outrage that has since swept through mainstream media around the world.

The 18-year-old Kovtun, who finished 11th all-around at last summer’s Olympic Games in Tokyo and third all-around at last fall’s World Championships in Kitakyushu, has maintained his composure on and off the apparatus since the invasion of his homeland began February 24.

Kovtun addresses the challenges he, his country and the world have recently been facing in this International Gymnast Online interview.

IGO: Congratulations on your gold and silver medals in Cottbus, and your gold, silver and bronze medals in Doha. Given the situation in your country, how did you manage to maintain your focus to perform so strongly in those finals?

IK: Thanks a lot, I’m very pleased. I tried and fought to the bitter end. My family and my coach (Irina Nadyuk) support me. We are all walking the same path together. I was scared for my people, for our freedom, for relatives and friends, but the coach and my parents set me up and helped me to go through the competition proudly for our people and represent our country with dignity.

IGO: What is the situation like for your family in Ukraine right now? How they are living and managing to survive?

IK: Our families live in fear and hear air raid sirens all the time, to which they are starting to get used already. The men went to defend our motherland. And the women watch the children and help the military as much as they can, like dig trenches, cook food, weave nets, sew clothes, help refugees and migrants, and so on.

IGO: In Doha, how did you manage to maintain your composure on the award podium with Ivan Kuliak showing the “Z” on his jersey?

IK: Initially, we did not see this sign. We noticed it in the pictures after the competition, awards and doping control were over. My family and coach raised me to be responsible for my people. I consider myself a good person, therefore I behaved and behave in a civilized manner and in solidarity with everyone, with respect. It was not easy to compete with the Russians, but at that moment we all were convinced that sports is out of politics. Unfortunately, the Russian guy Ivan showed something completely different – not the ability to compete with dignity and sportsmanship, but mixed sports with politics.

IGO: What message can you share with everyone regarding your hopes and expectations for peace in Ukraine?

IK: I am for peace on Earth. I call for all of us to respect and support each other, to bring our good thoughts to life. A deep bow to the whole world and to each one separately, that you support my country, our Ukraine. Good and justice will definitely win over evil and madness.

IGO:  What can people do to help Ukrainians, and especially Ukrainian gymnasts and their coaches?

IK: Almost the whole world is helping Ukrainians, both financially and morally. Many countries are taking our families to their homes and helping them in society. Gymnastics clubs in different countries are ready to accept our gymnasts with their families, and provide accommodation, meals and a place to practice. What else is needed? Close the sky over Ukraine. And that the Russian people gain courage and come out against their tyrant, we give them a great chance to gain freedom and learn to think, and not to live in eternal fear and be constantly zombified.

I am praying for Ukraine. I am proud to be Ukrainian. I love our land, the will to win and freedom of spirit, our unbending courageous character. Our people are strong and we are winners in life. Thank you all over the world for your help and support. Together, we are all strong, and this is the only way we will prove to Putin that in the modern world one cannot behave like this.

It is very, very painful for all the dead, killed and affected women and children, for innocent people and civilians. I believe that together we will succeed and win. God is with us and the truth is on our side. The whole world sees and knows everything, so I hope and believe that the Russian people will be able to boldly open their eyes and fight for their freedom and real truth, support us and there will be no war. Long live peace.

Anastasia Motak: ‘I Saw the Goal and Went to It’

Varinska on COVID-19: ‘A Reboot is Taking Place’