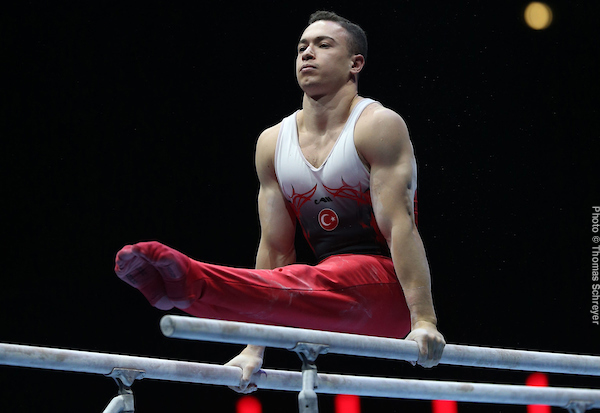 After a shoulder injury forced Turkish gymnast Ahmet Onder to withdraw midway through the all-around final at this summer’s Olympic Games in Tokyo, he resolutely compensated by placing fifth all-around at last month’s World Championships in Kitakyushu, Japan.

The 25-year-old Onder, who qualified eighth to the Tokyo all-around final and thereby established him as an all-around medal candidate at the top echelon of competition, is bound to keep ascending and determined to earn a medal-podium finish at the Paris Games in three years.

Following Kitakyushu, Onder has continued his ambitious acquisition of experience and exposure. On November 3 he placed fourth at the Arthur Gander Memorial, a four-apparatus meet held in Morges, Switzerland; four days later he and female teammate Goksu Uctas Sanli placed fifth at the Swiss Cup, a mixed pairs meet in Zurich. Onder is now preparing to compete in Germany’s Bundesliga circuit.

In this International Gymnast Online interview, Onder shares his perspectives on the personal milestone he achieved in Kitakyushu, his misfortune in Tokyo, and the confidence he has in himself and his Turkish team heading towards Paris.

IGO: Your fifth-place all-around finish in Kitakyushu was a jump in your score and rank from qualifications, as well as your best world championships all-around finish yet. What helped you technically and mentally improve for the final?

AO: As a result of the qualifications, I was upset that I didn’t qualify for any of the apparatus finals. At the very least, I would like to have competed in the final on parallel bars, where I was the last world runner-up (silver at the 2019 Worlds in Stuttgart). I had two options. The first was to try to do the best I could in the all-around final that would be held two days later, and the second was to beat myself up for things that I couldn’t impact now. As I talked to my mentors, family and staff, my mind was opened and what I needed to focus on became very clear to me. I eliminated the negative option. The thing that I should be upset about could wait. I said, “I will be upset in three days; now is not the time.” I believed I could get an all-around medal. I performed well and got my best score. I could also have gotten a medal, but it doesn’t matter. I successfully completed my mission.

IGO: After worlds you posted on social media that you are forging ahead towards your goal of winning a world all-around medal. What work remains to be done in order for you to reach that goal at the 2022 Worlds in Liverpool?

AO: I know I’ve been on the right track for years. I get bored from time to time by injuries, but despite everything, my vision is very clear. My strategy is very clear, in training and in competitions. My time will come. This is not just a belief. I know this.

IGO: What exactly caused you to withdraw from the all-around final in Tokyo after three apparatus?

AO: You’ve been preparing for five years, and the injury occurs when you’re closest to your goal. If someone were to ask me what is sports and what is an athlete’s life, this would be the first of the two sentences I would make. The second would be “to get over your biggest disappointment as quickly as possible and start working towards the new goal.” I was injured in Tokyo. During training I felt a great pain in my left shoulder. I went to qualifications with this pain and did my best. In the final, I had to leave halfway through. I asked myself many times, both then and after, if I could continue, and my answer was the same. That’s why I’m comfortable.

IGO: At which point in the Tokyo all-around final did you decide that you really could not continue, and how were you able to reconcile this decision, given the importance of an Olympic all-around final?

AO: I had question marks in my mind while going into the all-around final, but I thought I could hold on until the end. Rings really pushed my limits. The pain in my shoulder became unbearable and I quit. I’d be lying if I said I wasn’t psychologically challenged after the competition. Of course, I had a difficult time. But I’m young and I realize my potential. There is so much I can achieve. I will be on this stage again in Paris.

IGO: You were able to compete in the vault final in Tokyo, where you finished seventh. How much did your shoulder injury impact that performance?

AO: As we made our way to the vault final, I was there with more psychological pain than physical pain. I knew the vault table wouldn’t put too much strain on my shoulders. Still, I was cautious. You have also observed this. I wanted to do my duty and step off the stage. That was the thought in my mind that day.

IGO: In the lead-up to Tokyo, you expressed that Turkey had great potential as a team among the world’s leaders. Although the team did not qualify to the Games, Turkey qualified four individuals, and then two Turkish gymnasts placed among the top 11 in the world all-around final. How do you feel it has been possible for your team to fulfill your “prophecy’ in this short amount of time since the pandemic started?

AO: Turkish gymnastics is improving every day. It would not be right to focus only on the last few years. There is a structure whose foundations have been laid for decades, and this structure has brought results especially after 2010. In 2012, we sent athletes to the Olympics for the first time. We sent two athletes in 2016. We sent five athletes in 2020 (Onder, Ferhat Arican, Adem Asil, Ibrahim Colak and female gymnast Nazli Savranbasi). We had World and European Championships before we got here. I think all this reveals more than a prophecy for the future. There is a saying in Turkish that “If you see the village you don’t need a road guide.” Because it’s very clear, you can understand that. I think what will happen in the Turkish team is obvious.

IGO: With Paris three years away, what are your yearly and three-year plans regarding the strengthening of your all-around program?

AO: In a broad perspective, we will work for Paris for three years, but what we need to focus on is only the next competition. European championships, world championships, World Cups – I want to go one by one, step by step, and when I come to Paris, I want to step into that gym as an all-around medalist gymnast.