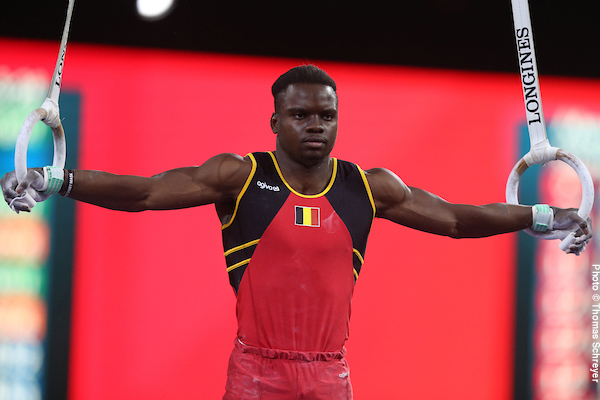 As 2021 world all-around finalist Noah Kuavita of Belgium heals from an Achilles tendon tear that he suffered last month, he looks forward to a complete recovery in six months and a fortified set of routines leading to the 2024 Paris Olympic Games.

Kuavita tore his right Achilles tendon on floor exercise at the Wase Cup held October 31 in Melsele, Belgium, just a week following the conclusion of the World Championships in Kitakyushu, Japan. After earning the 24th and last spot to the all-around final by scoring 77.632 in all-around qualifications in Kitakyushu, Kuavita bettered his rank and score in the all-around final, where he placed 20th with 79.598 points. His previous Worlds best all-around finish was 56th at the 2018 Worlds in Doha.

Kuavita’s forte is horizontal bar, on which he earned the fifth-highest score on that apparatus in the all-around final in Kitakyushu and placed eighth at the 2018 European Championships in Glasgow. He is among few gymnasts who perform a triple pike dismount, named for Denmark’s Kasper Fardan who first competed it at the 1996 Worlds in San Juan.

Born July 28, 1999 in Borgerhout, Kuavita is the son of Angolan parents who moved to Belgium in 1994. He trains under coaches Koen Van Damme and Bram De Schepper. Three years ago Kuavita and 2012 Belgian Olympian Jimmy Verbaeys were finalists on ‘Belgium’s Got Talent’ as the duo ‘Interius Fortitudo.’

Kuavita shares his rehab plan, and offers his view of his performance in Kitakyushu and his potential for Paris, in this International Gymnast Online interview.

IGO: When exactly did the injury occur, and when did you realize it was an Achilles tear?

NK: My injury happened on floor, on my last line with the double Arabian. At first I thought there was something wrong with the floor. I did not have enough height but I had enough rotation to land safely on my bottom. As soon as I landed I knew I tore my Achilles tendon.

IGO: What time frame have you been given in terms of when your Achilles will be fully restored and you will be able to train on it as you did before?

NK: The doctor said it will take about six months to fully recover, starting with two weeks of a cast and then seven weeks of an Achilles boot. I would be able to train other apparatus.

IGO: What is the plan in terms of rehabilitation therapy and actual training?

NK: My coach made a rehabilitation plan with our physiotherapist, starting with activating the muscles in my leg, to walking with my boot, and also doing a moving scan every month of my Achilles to see how the structure of my Achilles is healing.

IGO: For many gymnasts with leg or foot injuries, the time spent off the injured body part allows them to concentrate on upper body strength. For you personally, how will being forced to spend more time on pommel horse, rings and parallel bars improve your routines on those apparatuses?

NK: On rings specifically it will make me able to work more on the strength elements. On the others I would like to improve on difficulty and stability.

IGO: How are you preparing yourself mentally for the upcoming months of recovery and the need to bypass competitions?

NK: I will try to do basics as soon as possible after my surgery. I will also work on my upper body with our physical coach.

IGO: Looking back to Kitakyushu, you improved your all-around score by nearly two full points between qualifications and the all-around final. Yet in the final you had some unsteady performances. What do you think contributed to those errors, and what were your major takeaways you learned from your performance in the final?

NK: I think it had something do to with my back injury. I have disc bulging in my lower back, which made it difficult to train consistently. My major takeaways are that I have to be confident and trust my process.

IGO: On high bar you perform the triple pike dismount that is rare. Given how difficult it is to maintain form and also control the landing, what was your incentive for learning this dismount?

NK:  My coach thought about the dismount. He was looking for ways to improve my difficulty. I’ve done triple tucked in the past on training and he thought that my dismount preparation was good enough to do it piked. So I thought, why not?

IGO: Your second tumbling pass on floor is also cool – whip, immediate full-out. How did this combination develop for you?

NK: It started with whip, double Arabian due to the rules of the new Code of Points. But it was too difficult to end my routine with a full-out so I switched both passes, and my coach is also fan of the pass.

IGO: Between now and Paris 2024, what do you believe it will take for you to climb in the all-around standings?

NK: I’ll have to improve my stability and get my routines cleaner. And I have to increase my difficulty on a few apparatus and get more experienced.

Nina Derwael: “It feels as if the uneven bars speak to me, and in return, I listen.”