Tara Vella Clark: ‘We Can Put Malta On The Map’ 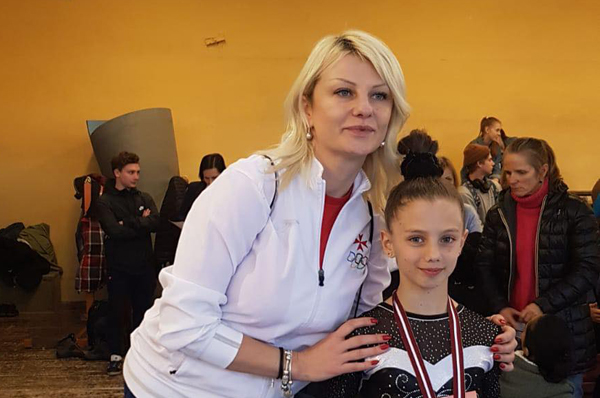 Maltese gymnast Tara Vella Clark has arrived in Mersin, Turkey, for this week’s European Championships ready to make her latest mark at the international junior level in promising style.

While Malta’s presence on the global gymnastics podium has been limited thus far – most recently Suzanne Buttigieg and Peppijna Dalli competed at the 2015 World Championships, and Ella Borg competed at last year’s Junior World Championships – Vella Clark is among the Mediterranean island’s youngsters who could well establish a more substantial Maltese presence on the world gymnastics scene.

Born September 1, 2006, in Guardamangia, Vella Clark trains at GymStars in Haz-Zebbug. Her coach of the past five years is Nataliya Berehova (née Pantileeva), who was a member Ukraine’s fifth-place team at the 1994 Team World Championships.

Vella Clark’s cross-continental accomplishments are already impressive in their own right, and significant for Malta. Last year she made the floor exercise final at the Stella Zakharova Cup in Ukraine, finished ninth all-around and made the vault and balance beam finals in the junior division at the Mediterranean Championships in Italy, won the Category II all-around title and two apparatus finals at the Laza Krstic and Marica Dzelatovic Memorial in Serbia, and placed fourth all-around at the Old Trnava Cup in Slovakia.

This March, just prior to quarantine, Vella Clark finished fourth all-around, first on vault and first on balance beam at the Tiger Cup in Latvia. She will be Malta’s lone competitor, junior or senior, in Mersin.

As Vella Clark and Berehova make final preparations for the European Championships that begin December 17, they share their thoughts in this International Gymnast Online interview.

IGO: You’ve already achieved some great things for Malta at the international level as a junior. To what do you attribute your success thus far?

TVC: My international success goes to my coach, Ms. Nataliya, whom I’m lucky to have, as she has come to me at the right time and moment. I was 9 when Ms. Nataliya took over my team to coach. We worked very hard to get where we are today. My club and my coach supported me in everything, when I had my difficult moments – especially when I wanted to quit – and helped to overcome all my bad days and support me in both bad and good days. My coach puts her heart in me. She also see over my well-being to make sure I overcome all my obstacles.

IGO: What attracted you to gymnastics in the first place?

TVC: My gymnastics career started when I was little, my mum thinking that I was all jumpy and energetic. I loved gymnastics and it was fun, and for this reason I stayed in the sport. She enrolled me for the after-school activity in gymnastics in my previous school, where my club used to hold basic gymnastics after school. I was selected to attend the national sports school. GymStars saw that I had potential, and I was recommended to move to the proper set-up of GymStars to train under the competitive program.

IGO: How did you cope with missing training during quarantine because of the pandemic?

TVC: I was out for four months during the pandemic, which at first was quite a shock for me, especially since we were preparing to go to Paris after competing in Latvia. I thought I missed my chance in doing any competitions this year. Nobody would have thought we shall be locked down for this long. During the quarantine my coach coached me and my team online. In June we were allowed to train outside, which was a relief. Finally after two weeks of training outside we went back to the gym. I was back at the end of June.

IGO: What is your training schedule these days?

TVC: I train three to four hours in the afternoon, and two hours in the morning, which means five to six hours a day, from Monday to Saturday.

IGO: What do you think are the reasons that Malta is improving in gymnastics?

TVC: Gymnastics in Malta is developing thanks to my club, GymStars, and my coach, who is very ambitious to develop the level in gymnastics in Malta. Together with our international judge Francesca Borg who is the technical director of the Malta Gymnastics Federation, she is implementing a good developing structure for gymnastics in Malta. The number of hours has changed. We sometimes train for five hours a day when we are off school, and before we did not have this opportunity. We attend and travel to high-level camps and train alongside other national teams’ members from abroad. Ms. Nataliya always insists on perfection, and for this I am thankful that she is my coach. She pushes me and I try hard to be clean. She motivates me to be better and build better skills and better scores, which took five years of me to build. If not for her I would not be where I am today. For this I would like to thank GymStars and Ms. Nataliya for all the support and sacrifice they give for me.

IGO: What plans do you have for 2022, your first year at the senior level?

TVC: To be able to compete in senior category in big events such as European Championships, Challenge Cup or World Championships to be on the way to the Olympics, I very well understand that would need to improve my scoring in each apparatus to get a better overall score. That would show the world that being a gymnast coming from a small island such as Malta, we can also put Malta on the map for gymnastics.

A chat with coach Nataliya Berehova:

IGO: What did you see in Tara that you felt could make her a good gymnast?

NB: When I saw Tara the first time, I saw dedication, competitiveness, perseverance and discipline. For the mental side, I prefer these qualities – mental maturity relative to the age group – for example, acts older than everyone else at the same age – listens, is willing and desires to work hard because she strives to be the best, shows a great deal of passion, is relatively courageous and willing to try new things, takes direction and criticism without confrontation, and mental toughness when facing adverse situations.

Quite honestly, I look more at the mental side of things than the physical. If I can find a kid who can meet my desires physically, then that’s great. But, if the gymnast doesn’t have it mentally, then their talent is useless. As long as the child doesn’t have physical attributes that would be very difficult to change via training, then I can live with their body imperfections. With good training, most aspects can be corrected to some degree. I’m more concerned with whether or not they’re tough mentally.

IGO: How well do you feel you have prepared Tara for the important senior competitions to come, such as World Championships?

NB: It took me five years to build up Tara to this level, and this is the first time she will be participating in such a level. Tara built her success at the international level by competing in high-level FIG (International Gymnastics Federation)-accredited competitions and mostly competing against the Eastern European countries, which with this gave her the experience to compete at such a level.