Switzerland’s Stefanie Siegenthaler: ‘Every competition tells its own story’ 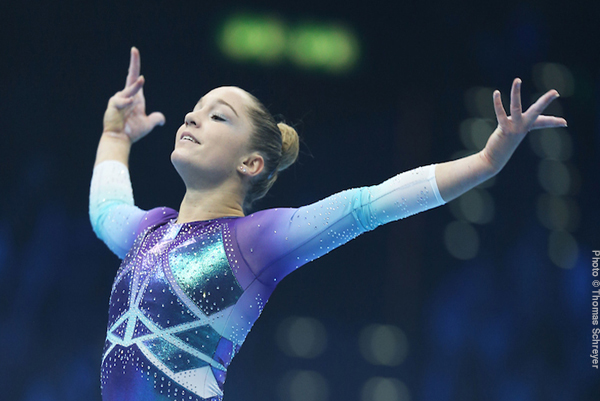 After patiently striving in the shadows as a core but unheralded member of the Swiss women’s gymnastics team in the past two Olympic cycles, 23-year-old Stefanie Siegenthaler is at last garnering individual attention as she looks ahead to the 2024 Paris Games.

Siegenthaler, a member of the Swiss team that placed sixth at the 2016 Olympic test event in Rio, has competed at four world championships starting in 2014. She finished 24th in the all-around final at last fall’s World Championships in Kitakyushu, where she made the worlds final for the first time.

Neither Siegenthaler nor her team qualified for the 2016 Rio Games or last summer’s Tokyo Olympics, but she is eying the Paris with hope and determination. She credits recently hired Swiss national team coach Wendy Bruce-Martin, a member of the bronze medal-winning U.S. team at the 1992 Barcelona Games, for energizing her and her teammates as they adjust their training program with the 2024 Games in sight.

In this International Gymnast Online interview, Siegenthaler recalls her first world championships final, assesses her role on her team since the retirement of Swiss superstar Giulia Steingruber, and describes the recent infusion of energy and commitment that her team is enjoying.

IGO: What do you think helped you improve so much in the past couple of years?

SS: Since 2016, I have always played an important role in the Swiss national team. But unfortunately, no one ever gave me the support I needed so that I could present or believe in myself as an individual athlete. We have been talking negatively about the COVID-19 virus for the last few months. But I think exactly these six weeks’ training break due to the pandemic have closed a big gap in me or given the starting signal in the right direction. I trained on my own – even without having a gym hall – made a personal training plan, and realized what I need and who I am. You could almost say I learned to be selfish in a positive sense. With this new foundation I then returned to the (national team) training hall located in Magglingen.

IGO: In Kitakyushu, you got off to a rough start on floor exercise. To what do you attribute the mistake you made? And, considering that it was your first routine of the final, how did you dismiss it from your mind as you moved on to vault?

SS: Quite clearly it was the nerves. I don’t want to make excuses, but making the final was, or is, a huge reward and success for me. I was not yet mentally ready to start in another competition at the World Championships. This small gap in concentration led to a technical mistake which resulted in the 1.0 deduction. As I mentioned, making it to the final was my big success. So I didn’t get prepared for the competition with any big expectations. I just got the chance to enjoy another competition next to the best gymnasts in the world. After the mistake on floor I was looking forward to gaining more experience on the next apparatuses and enjoy the atmosphere.

IGO: You earned your top ranking in the all-around final on beam, which was also your last apparatus. When you prepared to perform your beam routine, what was your mindset in terms of finishing the final on a confident note? And what kept you from feeling too much pressure during that beam routine?

SS: The beam is known to be the most likely apparatus on which to get nervous. But I have been able to work a lot with my mental coach over the last few years, which has made the beam now one of my strongest events. I also knew I had nothing to lose. I was not completely satisfied with my routine in qualifications, so I was happy to get the opportunity to improve again, which I succeeded in doing.

IGO: You have been part of the team since 2014, and especially integral in the Swiss team’s bid to make it to the 2016 and 2020 Olympics Games. Although the team and you personally did not qualify, what has kept you motivated to continue your career?

SS: You could almost ask yourself if it hasn’t become boring over all these years competing every worlds or European championships as a team member. But for me every competition tells its own story. You travel to another country, get in contact with the other athletes and have great new adventures. Of course the test event in Rio de Janeiro in 2016 was outstanding. I was so close to participating in the Olympics, a dream for which I have been breathing in the magnesia dust every day since I was four years old. Being able to feel this environment in Rio still gives me the energy to continue working with Paris 2024 in mind.

IGO: With the retirement of Giulia Steingruber, what do you think of your new role as a team veteran and the responsibilities you now have more of, in terms of mentoring the younger gymnasts in the team?

SS: For me it was also a process which I had to deal with when Giulia left the training hall. Although we as a gymnastics family were allowed to spend almost our entire everyday life with each other, she is a huge idol for me. What she has achieved is simply unbelievable and I congratulate her from the bottom of my heart. Clearly I can’t replace her, but as we have said, I have already competed in a lot of competitions. So with these experiences I would like to help the young girls on their way. Personally, I am also a very sensitive but also helpful person. I always want that everyone is doing well. Everybody should feel comfortable. So I hope to support the team like a “mom.”

IGO: Although Wendy has only recently become the team’s head coach, what do personally feel she is contributing to the team that was needed but absent before? And, what are some of the challenges you are managing in adapting to her coaching style?

SS: I didn’t know Wendy before, but when I typed her name into Google I was completely lost for words. What an honor to have an Olympian with us. After the first few trainings I was already overjoyed to have her with us. She takes care of each athlete individually in order to achieve the greatest potential for each of us, which is exactly what I had been missing for years. Besides, there is no hiding the fact that the Americans are much stronger than we are. The additional strength training helps us to be able to incorporate new elements. Many small things have changed in our training. Wendy attaches great importance to the smallest details, for example. In addition, there is a number for how often we should practice something. As an impatient person, I struggle a bit with this. But because I always want to please everyone and have them happy as you know now, I practice until Wendy is satisfied and I have improved, of course.

IGO: All around the world, teams are getting stronger and stronger, yet there are only 12 spots available for teams at the Olympic Games. Based on your several years of experience in the team, what do you think Switzerland needs to break into the top 12?

SS: That’s a difficult question. I am not the one who has plans far into the future, calculating every note. At the end, everyone has to compete and, as we saw in Simone Biles (at the 2020 Tokyo Games), anything can happen. It will be difficult but certainly not impossible. I think with the change of coaches everything has to be settled again first. As I said, we are currently building muscle and endurance. This gives us a good base to work on our weakness – the difficulty scores. Clearly we need to raise them up.

IGO: The new year will also bring a different mix of gymnasts to the Swiss team – experienced gymnasts such as you, along with newcomers fighting for a spot. What is your plan for making sure that you keep your spot in the team, and also make it more secure?

SS: That’s correct – we have a wide age range like we haven’t had in a long time. Some of the girls have not even been competing on a podium. But for me the same rules apply as for all the others. For the big events we have to pass two qualification competitions and the best gymnasts will get a place in the team. So I have to do it the same way as in the years before, just always be one of the best.

Giulia Steingruber: ‘I wanted to say goodbye in a good mood’

Switzerland’s Hegi Confident, Although ‘The Near Future Is Unknown’