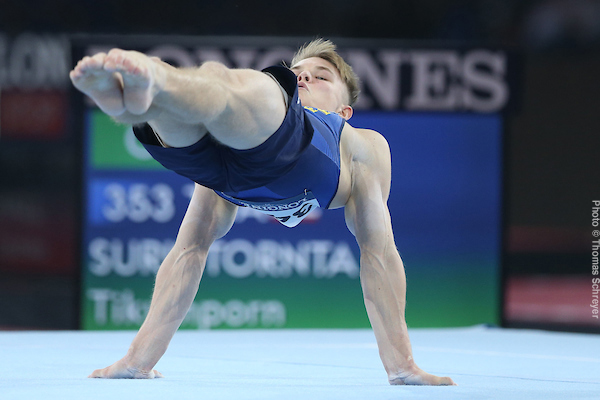 Swedish gymnast David Rumbutis’s gymnastics family tree extends to the heights of the sport, but he is adamant about distinguishing his success on his own merits at this summer’s Olympic Games in Tokyo.

Rumbutis’s 13th-place all-around finish at last month’s European Championships in Basel perches him in what he considers a feasible place to challenge for a spot in the Tokyo Games all-around final. His most recent results in major international competition mirror his impressive ascent in the approach to Tokyo; he earned his Olympic berth by finishing 49th all-around in qualifications at the 2019 World Championships in Stuttgart, where he improved 11 spots and over three points from the 2018 Worlds in Doha.

Born March 17, 2000, in Älvsbyn, Rumbutis is the son, sibling and cousin of high-level gymnasts. His father, Lithuanian native Sergej Rumbutis, competed for the Soviet Union, made the parallel bars final at the 1992 Worlds and performed an original triple front dismount on horizontal bar. His mother, Sara, a math and science teacher, is a former coach who serves on the women’s technical committee in Sweden and judges internationally.

Rumbutis’s older sister Adina, who was also a gymnast, is a judge and coach at the All Star Gymnastics club, where David trains when he is in Stockholm. His other older sister Julia, who competed internationally for Sweden and then Georgia, now coaches in Iceland. Their cousins are 2016 Finnish Olympian Oskar Kirmes and 2019 Worlds participant Robert Kirmes, whose ex-gymnast parents, Mati and Lina, represented the Soviet Union and Sweden, respectively.

In this International Gymnast Online interview, Rumbutis shares details of the fine-tuning under way for his Olympic routines, the motivation his family provides and the potential for which he is reaching after Tokyo.

IGO: Are you the type of gymnast who treats every competition with the same mindset, or do you have to mentally prepare for a big competition such as the World Championships in a different way? Do you have a special strategy for the Olympic Games?

DR: I am a gymnast who takes every competition the same. I walk out and I want to do my competition. Every new competition is for me a new opportunity to do better than the last time. This means I will walk out into the Olympic arena and be inside my own head throughout the competition. I will enjoy every moment of it, of course, but I know I have to keep my focus on myself all the way through, and then afterwards I can look back and analyze.

IGO: Several months ago you shared a video on Instagram of yourself performing some crazy skills, including a triple back salto on floor and a Bretschneider on high bar. Can we expect to see those from you in Tokyo?

DR: There will be a lot from me to watch if I make any finals but also in the qualifications, of course. On the qualifying day we are going for secure, clean routines and good scores. If I happen to make any finals we are planning to give it my all, take some risks and have fun without any injuries.

IGO: Your dad was known for taking risks and for performing unique skills, such as his triple front salto dismount on high bar. How much of your enthusiasm for risk comes from him, and how much comes from within you?

IGO: In addition to having gymnasts in your immediate family, your cousin Oskar has Olympic experience. What advice has he given you, in terms of handling Olympic competition, that you find particularly useful?

DR: I think it’s really cool and awesome having two cousins working really hard to achieve their goals. Both Oskar and Robert are big influencers to me and I look up to them a lot. Thinking of Oskar, we haven’t talked recently about his journey in 2016, but I think we both learn a lot about each other when we meet at competitions or training camps. I know that he likes to have fun being on the big stages but he is also very focused in every moment, which is what I am going for.

IGO: At the 2019 World Championships, you improved your all-around score from the 2018 World Championships by over three points. And in Basel, you earned your best Europeans all-around ranking (senior and junior) yet. To what do you attribute your big improvement from 2018-2019, and from 2019-2021?

DR: The improvements come from me looking back to see what went “wrong.” I saw that I looked really stressed and confused out on the floor. So I decided to be more calm and inside my own head and do my job. The result is making me very happy that things are improving. My next step will be to make the routines harder and cleaner, because right now it’s almost the same routines I had in 2018 – just a bit smarter and more secure.

IGO: What is your plan for increasing your difficulty scores in time for Tokyo? If you plan to gradually increase them, on which apparatus will you make the first increases?

DR: The plan has been doing a little extra on vault and then the rest as clean as possible. The next step is to get in more difficulty on all other events while maintaining the clean execution. We will focus on that after the Olympics. Right now we still have a lot of execution to make better. Being cleaner in the air and a lot of solid landings will push me a bit higher.

DR: We think that to make the all-around final at the Olympics will be challenging for sure. You will need routines with both difficulty and execution on all six events. Our plan now is to maintain the same routines because we think the difficulty is high enough, but work really hard on the last bits of execution. The small details and landings will be the difference to making the final or not.

IGO: How are you managing your family, training and academic lives?

DR: My parents live in Stockholm but right now I have an apartment down in Malmö to get closer with Fredrik (Pierreville), the coach who will follow me to the Olympics. When in Stockholm I live with my parents and am coached by the girls coaches at All Star Gymnastics. My father and Tatjana Berghwall are helping on all events as much as they can, and I am the only boy gymnast in that club. I studied economics in high school and have not yet started university. I decided to put school on a small break and follow my dreams to become the best gymnast I could possibly be.