After returning to the gym three weeks ago following COVID-19 mandated training restrictions, 2017 world high bar champion Tin Srbic told International Gymnast his training is back on track for the Tokyo Olympic Games that have been postponed until next summer.

With his goal of challenging for high bar gold in Tokyo on hold until next July, the 23-year-old Srbic shared his view of the pandemic, and its impact on him and all athletes, in this International Gymnast Online interview.

IG: During quarantine, some gymnasts have been creative and resourceful, and as a result, they can still train on their specialty. What are you doing to at least hold onto the skills, combinations and training program of your high bar routine?

TS: Here in Croatia there was never complete quarantine, and after two weeks, athletes who have qualified for the Olympic Games got permission to train in the gym. I had to keep my body in shape for those two weeks and then I came back in the gym working my high bar. I think it is very difficult for any gymnast to keep the body in shape when you are not allowed to train in the gym, so I hope there won’t be many injuries now when everybody starts training again. 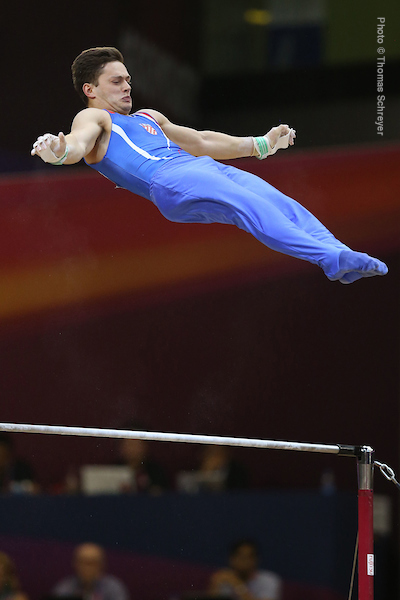 IG: How has the postponement of Tokyo affected your plans for your Olympic high bar routine? Will the extra time give you the chance to work on new skills and combinations, or do you already have your Olympic routine set and will use the extra time simply to perfect that?

TS: After qualifications in Stuttgart last year I was training my 6.5 (Difficulty score) routine for the final, but in the Stalder-Rybalko (combination) my tendon broke in my left wrist so I wasn’t sure I could even do anything, and then I went for the 6.2 routine. So my plan for the Olympics is at least 6.5, but with the postponement I have time to try a harder one. We will see how it goes.

IG: Assuming the top gymnasts on high bar all make it to Tokyo next summer, what exactly will you need to win gold there, given that the competition for medals on high bar is always so tough?

TS: My dream since I was five years old was to make it to the Olympic Games, and I did it, so I know I will just give my best out there and try to go for a clean, perfect routine as I always try to do. But you never know in that moment what will happen. We are all good enough for the gold, so first things first. We have to make it to the final and then think about medals.

IG: What tips or advice can you offer to your fellow gymnasts around the world, so they can keep motivated, physically and mentally, during quarantine?

TS: I can only say to them to think about their goals and dreams. I know everybody has them. Just think about it and you will be motivated all the time, even in these hard times. I got over every hard situation in my career thinking about why am I training every day, then I realize it is because I want to make it to the Olympics, and I want to be perfect in everything I do. It makes me happy.