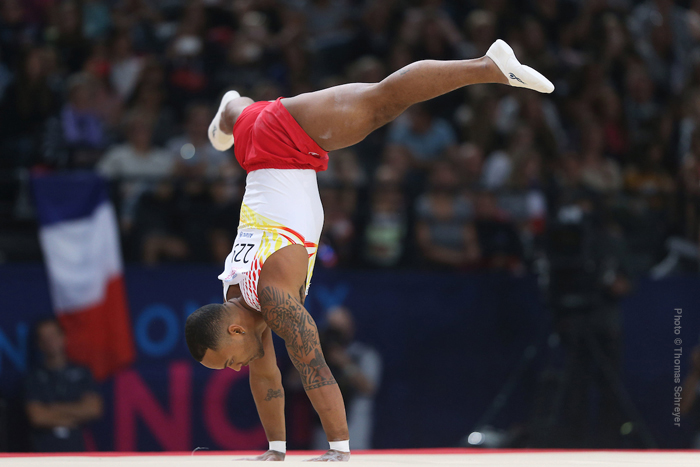 Spanish gymnast Rayderley Zapata, 2015 world floor exercise bronze medalist, spoke to International Gymnast Media about how he is handling the Covid-19 pandemic situation and talks about his frightening experience at the 2020 Baku World Cup, where he had to be hospitalized with coronavirus-like symptoms.

“Here in Spain the situation with the coronavirus is quite complicated. We are all locked up at home, and they also have just extended the quarantine for another fifteen days. This is one thing we have to do for the common good. It is the best we can do to make this pandemic pass, and for everyone to stay in good health and for the issue to be resolved sooner than later.”

On March 12, Zapata was scheduled to compete at the Baku World Cup event, but the day of the qualification he woke up ill, which not only prevented him from competing but also prompted numerous uncertainties for him.

“In Baku it was a difficult situation for me. I had a really hard time not because I was scared, but because I was also fighting to get an individual Olympic qualification spot on floor exercise. The day of the competition I woke up with a fever, and we went to the doctor to see if the fever was high, and it clearly was. They immediately sent us to the hospital. It was quite the experience, since I first went to a hospital where they did the analysis, but I decided not to stay there because the hygiene and the conditions were not adequate. So I asked to be taken to a different place. They took me to another hospital, which was an hour and a half from the center of Baku, but the conditions there were much better. It was super clean, and the treatments were great. I spent a whole day there waiting for the result of the coronavirus test. Upon my receiving the test result, which came out negative, they sent me to another hospital, which was in the center of the city. I had developed bronchitis and I had to stay there for two more days to reduce the effects of the bronchitis and the other symptoms.”

“Later I found out that the finals in Baku had been canceled, so I was wondering what would happen. They had also postponed the following week’s World Cup in Doha, and there was a lot of uncertainty of what would happen with the Olympic qualification.”

The 26-year-old Zapata, who currently leads the rankings of the Olympic qualification race on floor exercise, expressed that despite the uncertainty of the situation, he stayed positive.

“In a way I felt like I could benefit from the situation. With the cancelation of the competition and the postponement of the Doha World Cup to June 3rd, I didn’t have the slightest idea of what would happen. But I thought if the events were canceled altogether, mathematically I would have already qualified. On the other hand, if the world cups are held again in the future, thank God, I am well and healthy and feeling 100% recovered, I could still compete. I have resumed training at home, I have taken great care of my diet, I have stayed fit so I am very well.”

On March 30, the IOC (International Olympic Committee), the Tokyo 2020 Organizing Committee and the government of Japan officially agreed on a new date for the Olympic Games, which are now set to open on July 23, 2021.

“The fact that the Tokyo Olympics have been postponed to the next year in 2021 is good for me because I can prepare better. I haven’t stopped training in two years, I haven’t had a vacation; so, this coronavirus has been good for me in a way. You always have to take the positive out of such situations. My goal is to get as fit as possible. I can’t wait to go back to training, and I am really curious of what would happen to the Olympic qualifying process, because as of right now the uncertainty makes me more nervous.”