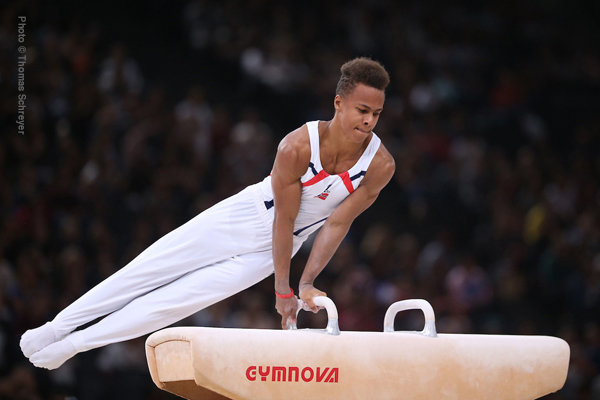 Having qualified for this summer’s Olympic Games in Tokyo, Norwegian gymnast Sofus Heggemsnes is now taking lofty aim at a top-24 all-around spot in his Olympic debut.

Heggemsnes, who will turn 21 less than two weeks before the start of the gymnastics competition in Tokyo, earned an individual berth for the Games through his performance at last fall’s World Championships in Stuttgart. He ranked a respectable 51st all-around in qualifications in Stuttgart, finishing among the top third of those gymnasts competing on all six apparatuses. Heggemsnes’s best individual apparatus results include seventh place on pommel horse at both the 2017 Challenge Cup of Varna and the 2018 Challenge Cup of Guimaraes, and third place on vault at the 2019 Challenge Cup of Szombathely.

In this International Gymnast Online interview, the self-confident Heggemsnes describes his emotional reaction to qualifying for Tokyo, as well as his training plan and goals for the Games themselves.

IG: Where were you when the news about Tokyo was made official, and which emotion did you feel?

SH: Oh my God, the emotion just took me, or hit me. This was my childhood dream! I decided when I was 11-years-old that I would go to the Olympics in Tokyo in 2020. I was in Stuttgart when it became official. It was so special, with my good gymnastics friends. The day after, when I landed in Oslo, I felt like a day in fame. I was met with television cameras and got interviewed. What a day. You know, it is nice to get recognized for what I do, but I do gymnastics more for the challenge of learning new things. I love to be in the gym and do my stuff.

IG: What key improvements or changes to your routines will you be making between now and Tokyo, so you can achieve your best results in Tokyo?

SH: I think my daily routine in the gym is quite good, so I continue in the same way. I feel that now is not the time to make big changes. The main focus will be on heightening my D-score (difficulty) and getting clean routines.

IG: How realistic for you is a top-24 all-around finish in Tokyo, and what will it take for you to achieve that?

SH: I am really working to get among the top 24. I have already made some changes. On high bar, parallel bars and rings, I have gotten some better improvements. So I hope to score even higher in Tokyo.

IG: You have made Challenge Cup finals on pommel horse and vault, so will you be focusing your training more on those apparatuses, or dividing your time equally among the six apparatuses?

SH: Since all-around top 24 will be the main focus, I’ll be focusing on all the apparatuses. I might focus a bit more on vault to try to get in a triple twist instead of the 2.5 twist. I think I won’t make a lot of changes on pommel horse.

SH: I think part of the improvement is because of me and (2016 Olympian) Stian Skjerahaug. We two together made the big jump upwards. Norwegian gymnastics has in general become better. I think the rise is all about having good coaches that push you and bring out the best in you. Then you have a much better opportunity to become good.

IG: Who are your current coaches?

SH: Valentyn Skrypin has been my main coach since I was 11-years-old. I am so grateful for what he has managed to achieve in me. I also have another coach, Vitalij Solodkijs, who is also important for me. And the good thing is, they work so well together to make me better.

IG: What is your family background?

SH: I have lived all my life in Oslo. I have a twin brother, two older brothers and two older sisters. My mother was born in California, so you may say I am a little American, too, but she and her parents are Norwegian. My father is from Sweden, and his parents are from Jamaica and Trinidad. So you can say I am a good mix of a lot of good genes.

IG: What statement do you intend to make about yourself in Tokyo?

SH: We also qualified a (Norwegian) girl, Julie Dicko Erichsen. Get ready for some black magic in Tokyo.