After three impactful seasons in the NCAA as a leader on the University of Utah team, MyKayla Skinner made a successful come back to elite gymnastics last year. She made the U.S. national team and then earned a spot on the 2019 world championships squat. After the podium training at last year’s worlds, she was selected as the alternate. In this Q & A for International Gymnast, Skinner, who is coached by Lisa Spini and Bruce McGehee, gives her perspective on her return to elite gymnastics and her experience being the alternate of the 2019 team. Skinner, who married Jonas Harmer in November last year, is a world bronze medalist on vault from 2014 in Nanning, where the U.S. team also captured the team gold. Also the alternate on the 2015 world team, where the U.S. also won team gold, as well as last year in Stuttgart, she is now a three-time world team gold medalist. In addition, Skinner was one of the three alternates for the 2016 Rio Olympics.

IG: Only very few gymnasts in the U.S. have attempted to return from collegiate gymnastics back to elite gymnastics, and you did it successfully making the 2019 world team. In brief describe the biggest challenges in your return?

MS: My biggest challenges returning to elite was trying to get my endurance back on bars and floor. One thing that was really challenging for me was getting my floor routine put together. I totally forgot how hard floor was. Trying to add in one more pass than my college routine but also adding harder passes as well. I forgot that you had to add in two leap passes and a turn plus running off of one foot for three tumbling passes. Probably, the hardest thing of all was landing my passes with two feet (lunge landing is a deduction in elite but not in NCAA). I was so use to lunging out of every pass for college that trying to stick or hop was difficult for a while.

IG: In a unique way you were seen as a great contributor to the success of the world team in Stuttgart. How did you see your role as the alternate there?

MS: After being an alternate in Glasgow and Rio it was really hard at times, but it definitely helped me grow in so many ways. With my elite come back I had no idea that I would ever make the world team. I always knew that there would be a chance that I would be an alternate because I had only trained for three months. It was really hard at times because after being an alternate twice you never want to have to be put in that situation again. But that being said, I knew that it would be a really good opportunity to still get to go to worlds and give it one more shot even if I was an alternate. Once I heard the news about being an alternate for the third time, it had brought back many memories of the Olympic trials. But I didn’t let that stop me from enjoying every moment and being there for my team every step of the way. All the girls were so nice and so supportive and wanted me to be able to be down on the floor supporting them just as if I was out there competing.

IG: The national team coordinator, Tom Forster, communicated that you were a great leader to the younger generation in Stuttgart. How does that make you feel?

MS: It was so fun being there for my girls; it felt like I was competing with them, and I just wanted to be a part of an amazing team that got to have a gold medal hanging around your neck.

I have had a lot of experience over the last couple of years throughout my gymnastics career and have matured in so many ways. Being an alternate will never stop me from reaching my goals and dreams, and it has definitely shaped me into the person that I am today. And I’m so grateful that I can take my personal experiences to share with others and help them through any challenges they are going through. Life is never fair, but I’m so happy that I could be there for my team and help lead them in anyway that I can.

IG: After your return to elite gymnastics from Utah, and considering you are now 23, is your training different compared to your elite training before college?

MS: Since I’m older this time around, I don’t train as much. Going to college for three years and only being able to train 20 hours a week or less makes it harder for me to just come back and train 32 hours a week. My coach Lisa (Spini) and I made a plan for when I decided to come back to elite. We both agreed that since I’m older I don’t need to train as much. I would say that gymnastics is somewhat easier now than before because I’m more mature and know my gymnastics better than ever.

IG: What do you think your strongest attributes are as a gymnast?

MS: I would say my strongest attributes are throwing big skills and being powerful. Also, being confident in myself, and super competitive!

IG: Gymnastics-wise what are your plans for the rest of the year and for the Olympics next year? What is the strategy of your program? Do you plan to focus on a few events only and pursue a team spot as a specialist, or do you plan to do the all-around? Are you working on any upgrades in certain areas?

MS: Now that all of our meets are canceled for the rest of this year, this gives me time to work on form and new skills. Just trying to take one day at a time. I am still planning on doing all four events and hope to make the 4-women team. I’m working upgrades on bars, beam, and floor.

IG: As gyms are gradually opening up now from the COVID-19 quarantine, what is your advice to young gymnasts in the U.S. and around the world?

MS: I would say to just take it one day at a time. Each day just try to be better than you were the day before. My mental trainer has taught me that you don’t need to be 100% everyday. Start at 5% and try to aim higher everyday until you reach 100%. Don’t feel stressed because everyone is going through the same thing. Try to have fun, and don’t forget why you started. 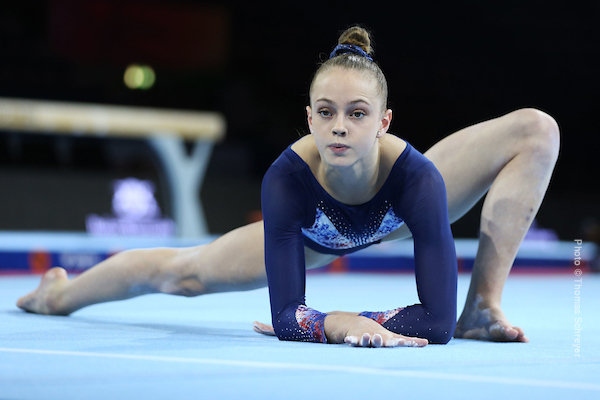 Pontlevoy on COVID-19 and Injury Rehab: ‘It’s a Second Chance’

French gymnast Claire Pontlevoy told International Gymnast that the new timing of the postponed Olympic Games in Tokyo may well be promising for her after all, given that a torn ACL would have kept her out of the Games had they remained on schedule for July.