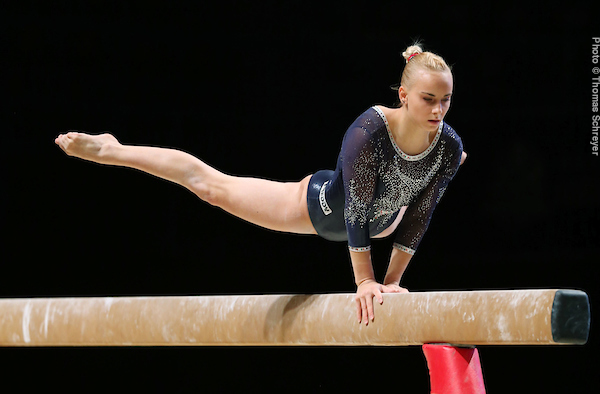 Italy’s Asia D’Amato, who notched a pair of personal landmarks at this fall’s World Championships in Kitakyushu, is earnestly vaulting towards future successes in competitions leading to the 2024 Olympic Games in Paris.

Born February 7, 2003, in Genoa, D’Amato trains at International Academy in Brescia where she is coached by Enrico Casella, Marco Campodonico and three-time Olympian Monica Bergamelli. She and her twin sister, Alice D’Amato, competed at last summer’s Tokyo Games, where Alice placed 20th all-around and Italy placed fourth in the team final.

The twins were also members of Italy’s bronze medal-winning team at the 2019 Worlds in Stuttgart, where the Italian women won a world team medal for the first time in 69 years.

In this International Gymnast Online interview, D’Amato reflects on her silver medal-winning performance in Kitakyushu, her ever-supportive relationship with Alice, and her hopes for the Italian team heading towards the 2024 Olympic Games in Paris.

IGO: In Kitakyushu you won your first world championships individual medal, and made your first major all-around final since the 2018 European Junior Championships. How do these accomplishments rate with each other?

AD: Indeed it was an incredible experience, and I still find it hard to believe that I won the silver medal at a world championships. I am also very happy because I managed to perform both vaults well, since it had been a while since I had presented them both in competition. I left for these world championships knowing that I could compete in the final on this apparatus, and then even after qualifications I entered the final with the third-best score.

As for the all-around final, it was definitely not my best performance because unfortunately I made two mistakes – one on uneven bars and one on the beam – thus finishing in 12th place. But I’m still happy because it was my first all-around final after Glasgow 2018 (European Junior Championships).

IGO: Were the problems you had on uneven bars and balance beam in the all-around final caused by nerves or technical errors?

AD: When you reach that level, tension and adrenaline are felt. My mistakes were probably caused by a lack of attention, because even in training it is very difficult and I make mistakes on these two elements. Unfortunately when come to the competition you are a little careful. You can make anything go wrong even if you often make these elements perfect.

IGO: Starting your all-around final with mistakes on your first two apparatus, you managed to consolidate your performance on floor exercise and ended with a very strong vault. How did you regain your confidence after balance beam?

AD: Fortunately, having done so many competitions and also having a lot of experience behind me, I was able to manage the tension and adrenaline by finishing floor exercise and vault very calmly without making other mistakes.

IGO: In the vault final, you finished solidly in second place. With higher start values you might have challenged (Brazil’s) Rebeca Andrade for gold. Looking ahead into 2022, what are your plans to upgrade one or both of your vaults?

AD: Let’s say that all the finalists except Rebeca were competing for second and third place because we were hardly able to overtake her, because she had higher vault values than ours. Looking at 2022 my goal is for sure to increase the start value of the second vault to be able to become more competitive and compete in other finals, and who knows, maybe other medals!

IGO: In our recent interview with Alice, she mentioned that, although you and she are always competing against each other, she does not consider you a rival. How do you, yourself, manage to avoid viewing her as rival?

AD: Absolutely no. As she told you, we do not feel “rivals” at all. On the contrary, we help each other and we give each other strength. When she gets great results I am very happy for her and vice versa. Even when I won the medal at the World Championships she burst into tears of happiness because it was as if she too had won the medal. So it was also when she won the bronze medal (on uneven bars) at the (2019) European Championships in Szczecin.

IGO: Considering the new Code of Points, how do you and your coaches plan to adjust or rework your routines so they have maximum value from 2022-2024?

AD: Yes, the next year’s changing of the Code is certainly not easy because we have to change all our routines, trying to insert elements of value in order to keep our start values high.

AD: Yes, absolutely in fact we are so happy! Let’s say that the periods before these competitions were very difficult because in order to obtain these results we worked really hard, but fortunately behind all this work there were people who supported us from GS Fiamme Oro (Golden Flames of the State Police – sports organization she represents). I thank them very much because they help us in everything. And to our family and the coaches, thanks to them. All the work done has been rewarded with great results. After the World Championships the road was even more uphill because with the arrival of COVID and then the last-minute injuries certainly did not help the team. In fact we left for the Olympics not even knowing if we could make it to the final. Now fortunately the injured girls are also recovering, hoping to get back in shape next year to get other great results and then qualify for the 2024 Olympics.

Italy’s Alice D’Amato: ‘2021 has spurred me to work and move forward’

Ferrari: ‘I was hoping this would finally be my Olympics’

Italy’s Edalli on Quarantine: ‘There Were Many Moments of Discouragement’

Casella: ‘We Must Help Our Country To Rise From The Ruins’