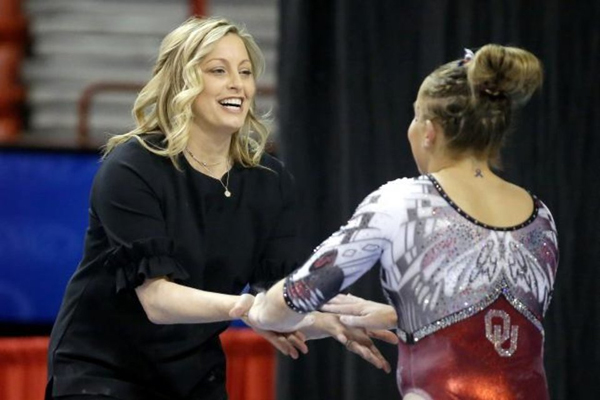 University of Oklahoma head coach KJ Kinder and her team were undefeated and ranked number one this season when on March 12, the NCAA officially cancelled the remainder of the season due to the COVID-19 pandemic outbreak. Kindler led the University of Oklahoma to their first ever national championship title in 2014, and under her leadership the Sooners have won three more titles since, which makes it four in the last six years.  Kindler is known as one of the most creative and unique choreographers in the NCAA, and in this interview for IG she explains in detail the way she goes about making the choreography for her athletes.

IG: You’re one of the few head coaches in the NCAA who choreographs both the floor and beam routines for your athletes, and you are one of the most respected choreographers in the NCAA. How did this come about and is there something in your background that prepared you for this?

KJK: While in high school, I was given the opportunity by my club coaches to choreograph my own floor routines. It was not something that they allowed everyone to do, but it was something that I showed a lot of passion about and they recognized that. Honestly, I think that I truly got my love of choreography from a college gymnast at Hamline University named Lori Tischler. She used to make up my floor routines when I was really young – fifth, sixth, seventh, eighth grade — and she just really inspired me. I loved watching her and learning how we selected the music and how the whole process worked. I just started really loving dancing and performing and communicating something to the audience. I moved to Connecticut from Minnesota when I was a junior in high school and my coach allowed me to make up my floor routines…I was given that creative freedom and that catapulted my love for it and desire to learn more about it. I don’t have a formal dance background. I certainly took you some jazz and ballet classes when I was younger, but not more than a 3-month class kind of thing. I knew when I took over as an assistant coach at Iowa State that that was one of my strengths and that it was something that I could bring to the table that the other staff members didn’t have.

IG: Can you describe the process of choreographing a floor routine?

KJK: The first step is finding the music – and it has to move you! This is important because certain music may move one person and not another person. I could play music for Maggie (Nichols) and she may say “No way, Jose!” whereas Jade (Degouveia) would say, “I love it!” I think it’s important that we find a piece of music that speaks to the individual performer and it also, quite frankly, has to speak to me too. You have to satisfy two people! Anything that I can find to really bring out the personality of the athlete kind of leads me to select certain music. Our athletes are involved in helping find the music and so is my volunteer coach, Ashley Kerr. So, we put a lot of people on the job. We are looking *everywhere* for that great piece of music that an athlete can just wrap their arms around and love. If you don’t love your music, you’re pretty much done at that point. Step two is creating the piece and I do that in two to three meetings (with the athlete). I don’t pump it all out at one time. I like to meet and see how it goes. If I get rolling, I might do more. It depends on the mood sometimes. If things are not clicking, I might just send her home and arrange to meet at another time. But, sometimes, I will be clicking so much that I can finish the whole thing all at once. But, the typical approach is two to three meetings. Then, the goal becomes cleaning it up as the season goes along.  It’s really important to me that they are communicating something or have some sort of story or at least a character to portray. Eye contact and facial expressions are also important. I want the person in row 3 and row 50 to feel the same thing. To do that in college, you have to be quite animated and a little bit over the top, in my opinion. I think it helps to communicate what you are trying.

IG: Since you mentioned earlier that your coaches allowed you to have input into the choreography of your routines, do you allow your athletes to take a similar approach?

KJK: Absolutely, if they wanted to do that. But, I have to love it and they usually just allow me the creative freedom to do it. Except Chayse Capps. Her dance background was incredible, but even she gave me creative freedom to do it. She sometimes said, “I like this better” or “I think this looks better”. For all of my athletes, I may say, “do you like this?” or “do you like that better?” When they see it on someone else, it helps, so I get a lot of input that way. But, the individual moves and some of the creative stuff usually comes from me. If they have individual moves that they have always done, I always try to incorporate those moves. For example, Maggie has done her chest/scissor roll every single year and it is kind of her thing. I try to keep the things in that are unique to the athlete.

IG: UCLA, under former head coach, Valorie Kondos-Field, was also well-known for their floor choreography. Did that motivate you? Did it create extra pressure?

KJK: She was the first person to take it to another level in college gymnastics. I don’t know that we were all paying that much attention to it. Her creations were unique, different and out-of-the-box. It gained notoriety for her program and attention to her program as well as her skills and her creativity. I think all of the NCAA coaches woke up to that call. She pushed everyone. She tried to be more cutting edge, more creative, more expressive. Because she paved that path for us all,
we have really taken floor exercise to another level, on the dance side. Her style is different than mine. I do consider myself very versatile. I try to do different styles and not the cookie cutter kind of style. I really try to cater to individual personalities because I think that only assists in their performance. If they’re uncomfortable, it’s very hard to get them to really come out of their shell. But, I will say that Val was a trailblazer in choreography and she made us all snap out of it and get our acts together.
A lot of programs try to lean toward a certain style. I consciously try not to lean toward a certain style because these women are different. They look different and they like different things. So, you want this to be an expression of their individual being. You can’t take each person and put them in a box.

IG: Have you ever had the experience, choreographically, when you thought that you had a great fit for this person, but then realized, even after the music was selected, that you needed to go in a completely different direction?

KJK: That definitely happens! It just happened this year. The really great thing is that even if I have put a lot of effort into the first routine, I am smart enough to know that it should be scrapped and we need to start over. This year, with Vanessa Deniz (see video), I started with a different piece of music. Honestly, I thought it was a good piece, but I don’t think it spoke to her and I don’t think she was able to express herself in the way that I would have liked. I made up the routine and it just wasn’t working for me, and I don’t think, for her either. We picked a totally different piece of music and started over. So, she’s had two different floor routines in six months. As a freshman, you get so excited to get your first floor routine and I had to scrap it and give her a different one. In hindsight, I think she would say that it was the right decision, but it was probably a little stressful too!