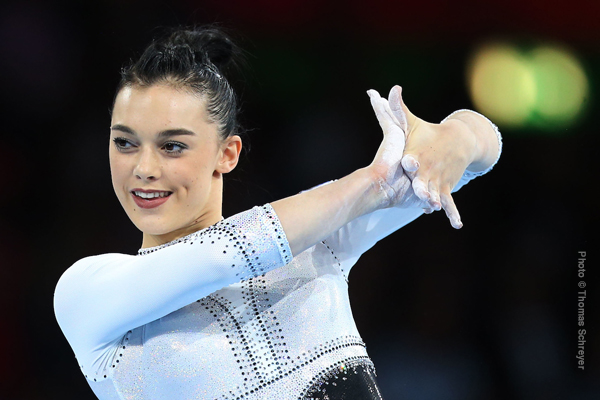 Italy’s current top all-arounder, Giorgia Villa, lost both of her grandfathers to the coronavirus, the Italian Gymnastics Federation website reported in an article on April 2nd. “I have to admit I cried a lot,” she mentions in the article. Villa, who led the Italian team to a historic team bronze medal at last year’s world championships, is from Ponte San Pietro, a town in the province of Bergamo, which is one of the most affected regions in Italy by the coronavirus. “I couldn’t even say good-bye to them for one last time. Grandpa Piero and grandpa Giorgio will be protecting me from up there,” she adds to her comments in the article.

Villa, who celebrated her 17th birthday on February 23, introduced herself to the gymnastics world with an outstanding year as a junior in 2018. She won five medals at the junior European Championships, and two months later at the Youth Olympic Games she dominated the competition by winning the all-around, vault and floor titles and placed second on uneven bars.

In the article Villa goes on to describe how, along with several national team members, they are quarantined at the Brixia International Academy in Brescia, Italy, with coaches Enrico Casella, Marco Campodonico and the mother of junior gymnast Veronica Mandriota, who serves as the cook at the campus. The charming Italian goes on to explain how their school has moved to predominantly online teaching except math. “Our math professor is very special. His name is Enrico Casella. He is really good, explains very well, and I know some will not believe it, but he is very patient, especially with some of us without my mentioning any names,” Villa describes in her interview. She explains that since the start of the pandemic, they have not been able to travel back home, and that weekends are hard to fill.  So they pass the time by playing cards, listening to music and watching television. “Casella is really good at inventing something for us to pass the time,” she adds. “Last Sunday he designed a complete fashion show for us with voting and an award ceremony. It was crazy fun.”

Since the IOC (International Olympic Committee) has officially moved the Olympic Games to 2021, Villa explains how their training has drastically changed as well. “Let’s say that the hours are more or less the same, but the intensity instead is decidedly different. Not knowing exactly when to start competing again, it is not possible to plan our work, “ she adds. “When we learned of the postponement it was pointless to hide our displeasure. We worked hard for the Olympic goal. We had done great things, and we deserved to have this extraordinary experience. However, let’s be clear, we all understand and share the decision of the IOC and the Japanese Organizing Committee.  It will mean that we will have more time to prepare ourselves to be better.”