Italy’s Alice D’Amato: ‘2021 has spurred me to work and move forward’ 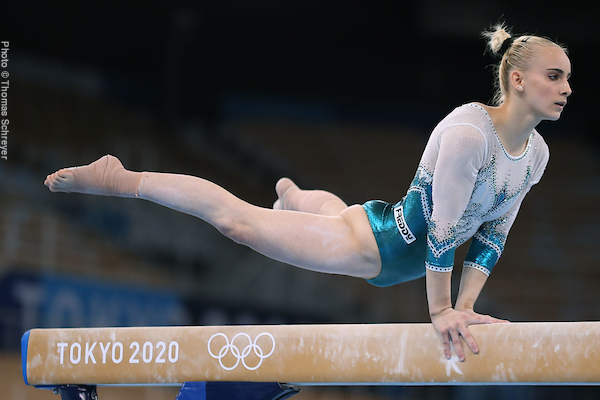 Despite two mistakes, Italian gymnast Alice D’Amato experienced satisfaction and gained a new appreciation for her potential through her eighth-place all-around finish at last month’s World Championships in Kitakyushu, Japan.

D’Amato claimed the field’s third-highest vault score and sixth-highest floor exercise score, and bettered her all-around ranking in qualifications by five spots in this, her first world all-around final. She is ready to build on her performances from this summer’s Tokyo Olympics Games as well as in Kitakyushu, as she shifts her training focus to next fall’s Worlds in Liverpool.

Born February 7, 2003, in Genoa, D’Amato trains at International Academy in Brescia where she is coached by Enrico Casella, Marco Campodonico and three-time Olympian Monica Bergamelli. She and her twin sister, Asia D’Amato, competed at the Tokyo Games, where Alice placed 20th all-around and the Italian team placed fourth. Asia was 12th all-around and second on vault in Kitakyushu.

The twins were also members of Italy’s bronze medal-winning team at the 2019 Worlds in Stuttgart, where the Italian women won a world team medal for the first time in 69 years.

The diligent D’Amato shares her thoughts on Kitakyushu, sibling rivalry and the work that lies ahead of her in this International Gymnast Online interview.

IGO: Although not your best performance, eighth place all-around in Kitakyushu was still your best Worlds performance in history. When you reflect on the all-around final competition, what do you think caused your mistakes on balance beam and uneven bars?

AD: Yes, it wasn’t my best performance ever, but I’m happy anyway because it was my first all-around final at a world championships. It wasn’t exactly a good start because I started the final on the beam and immediately made a mistake. After the beam I continued to floor and immediately after to the vault, where I performed a good exercise and a good vault. My competition ended with the bars where I made another mistake, certainly not due to the previous crash, but because I wanted to try a connection – Pak-Shaposhnikova with half turn – that I didn’t always succeed in during training.

IGO: How did you recover mentally after beam so you could perform much better on floor exercise and vault?

AD: It wasn’t easy because at those levels the tension and adrenaline are felt, and you can’t always manage them. However, not being my first international competition and also having some experience on my shoulders, I was able to manage the tension so as not to make further mistakes.

IGO: How were you able to sustain yourself, physically and mentally, so you could be at your strongest for the two most important competitions of your career – the Tokyo Olympics, followed closely by the World Championships?

AD: We have been working towards these goals for a long time. There has been preparation, planning and organization created specifically by our coaches and all the staff who have been following us for years, able to get us ready for these competitions. We also have many people who help us mentally including the psychologist, the family and the sports group of the Gold Flames of the State Police (sports organization) that supports us and helps us to carry out our business in the best way.

IGO: The Italian team has several strong all-arounders, including your sister Asia who was your toughest opponent in Kitakyushu. How do you stay 100% competitive – treating Asia as any other opponent – when you are competing against your own twin sister?

AD: Yes, Asia was one of my opponents at the world championships in the all-around final. We weren’t able to share closely with each other because we started with different apparatus, but I still cheered for her from afar and vice versa. Asia and I on the competition floor do not feel against each other because she does not represent a real opponent for me. We are united and we give each other strength as if at that moment she was my teammate.

IGO: What are your plans for competitions between now and the 2022 World Championships in Liverpool?

AD: Between now and Liverpool there is still some time. My plans would be first of all to get back in shape physically. I want to get back in shape and try to insert new elements to raise my start values ​​in all apparatus in such a way that they are increasingly competitive and, of course, start testing them in the next competitions that will take place next year.

IGO: Based on your experiences in 2021, what are the key improvements you hope to make for next year?

AD: My experiences of 2021 have spurred me to make me want to work and move forward – to reach higher and higher always giving my best and managing, if possible, to take away all the satisfactions for which I have worked with everyone over the years.

Ferrari: ‘I was hoping this would finally be my Olympics’

Ferrari Back On All-Around Track For Tokyo: ‘I Am Giving My All’

Italy’s Edalli on Quarantine: ‘There Were Many Moments of Discouragement’

Casella: ‘We Must Help Our Country To Rise From The Ruins’