Israel’s Ofir Netzer: ‘I do not feel too old; on the contrary, I feel stronger than ever’ 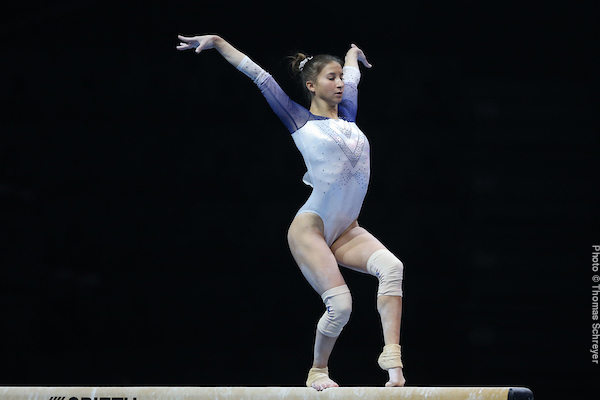 Enduring a trio of ACL injuries over the past eight years, 25-year-old Israeli gymnast Ofir Netzer may just be hitting her stride after becoming the first Israeli female gymnast to reach a world championships final last fall.

Netzer, who finished sixth on vault at the World Championships in Kitakyushu in October 2021, suffered her first left ACL tear during training in 2014, and tore it again at the 2015 European Championships in Montpellier. She tore her right ACL at the Israel Championships in August 2019, but returned to competition at last spring’s Europeans in Basel, where she finished a respectable 12th on vault and 46th all-around in qualifications.

In this International Gymnast Online interview, Netzer shares her insights on her landmark achievement in Kitakyushu, her determination to persevere after injuries and her hopes for her gymnastics future.

IGO: Going into the competition in Kitakyushu, what chances did you think you had to advance to the vault final?

ON: Before the competition, I thought I had a good chance of reaching the all-around final. But at the end of the competition, after weak competition in the other apparatus and good performance on vault, I saw that I had a good chance of making the vault final. I’m so happy I made it to the final. It’s not only the highlight of my career, but it’s also an important achievement for Israeli gymnastics, and I’m glad I’m the first female gymnast to do it.

IGO: How much did sixth place in the final help you erase doubts or fears you might have had based on your latest ACL injury?

ON: The year 2021 was a long mental rehabilitation process for me. Actually, the first step in dealing with returning to competitions was the last European Championships in Basel (in April), where I showed myself that I was capable of becoming a gymnast again. Then I set bigger goals for myself. Sixth place in the vault final of the World Championships was for me the proof that despite all the injuries, I’m a gymnast at the highest levels in the world.

IGO: This year the competition to advance to the final at Europeans and worlds is likely to be even tougher, because some of the gymnasts from the Tokyo Olympics did not participate in Kitakyushu. Also, some first-year senior gymnasts will join the rivalry. What plans do you have to perfect or upgrade your vaults, so you can stay in the group of finalists?

ON: I try not to think about what other gymnasts do, because it can only get in the way of me concentrating on what I need to do. However, I know that in order to remain a finalist in the European and World Championships, I need to upgrade the level of difficulty. Physically, I know I can compete with harder vaults. But I want to get to a point where I’m mentally strong enough to get to the right moment and the right time, and then I’ll show the new vaults I’m practicing on.

IGO: What is your training situation like in Spain?

ON: I moved to live and train in Palma de Mallorca, at Club Esportiu Xelska, in January 2019. I moved here because my former coach, the late Boris Kinev, passed away, and I was looking for a new training place. I wanted to train with Pedro Mir Homar so I contacted him. He coaches me today. In addition to him, there is a large team of coaches: Yolanda Llompart, Cris Riera, Jacqueline Bruell, Silvia Tolosa, Juanjo Martínez and also the coach of the men’s team, Manolo Martínez, who helps me mostly on vault.

IGO: Although you have earned some of your best results earlier in your career, what is your perspective on your potential to continue staying competitive as you get older?

ON: The results I achieved when I was younger, for example fourth place at the European Championships in 2013, are amazing. I will always remember it as a happy moment in my life and meaningful to my career. But I think the results I have achieved this year and the results I will achieve in the future are much more significant because they come after a long struggle with injuries, surgeries and long rehabilitations. I do not feel “too old.” On the contrary, I feel stronger than ever. It’s true that I need more control over training efforts, but I actually think that as I get older, I understand my body better, taking everything more calmly.

IGO: Despite your series of ACL injuries, how do you manage your physical training, as well as your mental training, so you can believe your best years in gymnastics are ahead of you?

ON: Together with my coaches, physical trainers and physiotherapists, we have prepared a plan that will include everything I need to keep my knees healthy. I have a daily program of special knee exercises and I am very strict about it. For me this is the most important part of the training. In addition, in the last year I started working with a mental coach, Hila Harel, who helps me with the whole mental part in training and competitions. Mentally, I think rehabilitation is still in progress. I believe that once I overcome fears that still exist, I will be able to continue to achieve great things in gymnastics.

Israel’s Lihie Raz: ’I Did My Best To Channel The Pressure’

Medvedev on COVID-19: ‘We Can Choose How We Approach Crises’