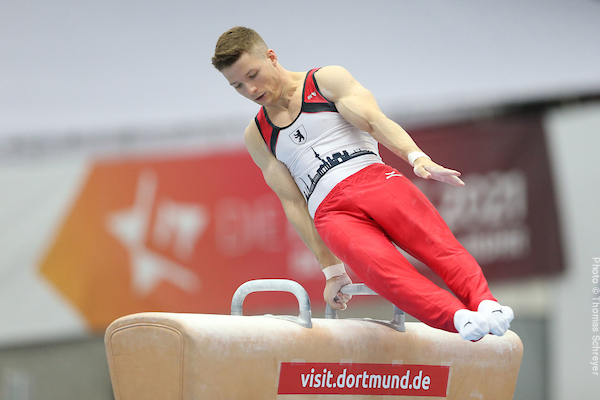 Five years after serving as reserve on the German men’s gymnastics team at the Rio Olympic Games, Philipp Herder has pulled himself out of what he calls “a motivation hold” to snare a spot in the starting lineup for his country at this month’s Tokyo Games.

Herder shares his struggle-filled journey from Olympic alternate to starter in this International Gymnast Online interview.

IGO: Your road to Tokyo included your status as the team reserve in Rio, your neck injury in 2019 and then the pandemic. What kept you mentally and physically confident over these difficult past few years?

When the pandemic broke out in 2020, I fell into a motivation hole. At first you couldn’t train at all, then again but only partially, and there were no competitions. So you trained a little “in the void.” It was also difficult to regain the focus on the competitions, because the last big competition was a good one-and-a-half years ago when the Olympics qualifications were made. Fortunately, I was able to pull myself together again in the last few months. I thought to myself, “You only have this chance once more and you’ve already come this far. You will hold it against yourself forever if you don’t pull yourself together now.”

IGO: In Dortmund you finished fifth all-around, and in Munich you finished fourth all-around. What do you think ultimately earned you a spot on the team? In other words, what did you think those responsible for selecting the team saw in your performances that makes you essential to the team?

PH: I lost a few points in the qualifications so that if I managed a good all-around competition, I have a lot more potential than I showed. And what qualifies me for the team, I think, is relatively good team ability and balance in all apparatus. Because I have been able to reduce my weaknesses a little in recent years, I am important for the team on every apparatus or at least a good protection in case a teammate should made a mistake.

IGO: Since the team for Tokyo includes four solid all-arounders, what will you be focusing on between now and the Games, so you have the chance to advance to the (two-gymnasts-per-country maximum) all-around final?

PH: I have to do a flawless competition, then it should be possible to move into the all-around final. That is why I will once again attach great importance to stability in the routines in preparation. It would be best, however, if our whole team comes through without a mistake and with good performances, and we make it to the team final. That would be far more important to me.

International Gymnast magazine’s coverage of German team members for the Olympic Games in Tokyo is listed below. To purchase back issues, click here.