Germany’s Lukas Dauser on this week’s Worlds: ‘The goal is helping the team in the best possible way’ 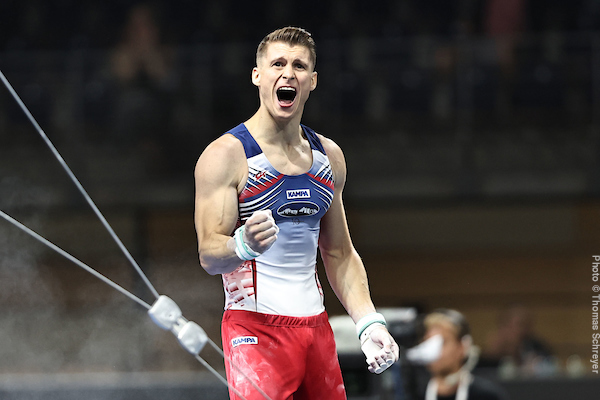 Olympic silver medalist Lukas Dauser of Germany told International Gymnast Online that he arrives at the World Championships in Liverpool this week in peak form after winning his country’s two trial competitions in quick succession.

Dauser, who placed second on parallel bars and 18th all-around at last summer’s Olympic Games in Tokyo, is optimistic for individual and team success in Liverpool, where competition takes placed October 29-November 6.

In this International Gymnast Online interview, Dauser comments on his preparations and hopes for Worlds, and offers his personal insights into the other German gymnasts who will compete with him in Liverpool.

IGO: Having won the all-around at both German team trials for the World Championships, what do you think enabled you to produce two first-place all-around performances so close together?

IGO: As the top finisher at the past two German national championships, as well as at both trials for Worlds, you are officially the leading German gymnast heading into Liverpool. However, Nils Dunkel was only 0.10 points behind you in the second trial competition. So between now and the start of Worlds, what will be the focus of your training, so you can remain #1 on your team?

IGO: What is your targeted all-around ranking for Liverpool, and what will you need to reach it?

LD: I am fit on all six apparatuses, and especially in the all-around a lot can always happen. There are six apparatuses and you can hardly make any mistakes. I don’t have a specific ranking as a goal. I want to get into the all-around final, show six good routines there and then see what comes out of it.

IGO: You also have the chance to improve one ranking to gold on parallel bars, following your silver in Tokyo. Which gymnast or gymnasts do you view as your chief rivals for gold in Liverpool?

LD: The competition on parallel bars is very high worldwide with many good gymnasts. The Chinese Zou Jingyuan (who won gold in Tokyo), the third-placed gymnast at the Olympic Games Ferhat Arican (of Turkey) or Joe Fraser (of Great Britain), who recently became European champion, are strong competitors. In addition, there are other gymnasts from Asia, but also from Europe, who can perform very well on parallel bars, and I want to compete with them.

IGO: What routine on parallel bars can we anticipate from you in Liverpool?

LD: My bars routine will be the one with 6.6 in the Difficulty score, at least in the qualifications. That’s the one I showed at the European Championships and also at the Olympics. If I make it into the final, I might be able to add another tenth. Otherwise, I’m already working on a routine for next year that will be a bit more difficult, but it’s not yet stable enough for me to show it in Liverpool.

IGO: In terms of your team, what about this team makes Germany strong and unique? What can you say about each of the guys?

LD: Unfortunately, our team was shaken up again last week due to illness. We had two absentees – Lukas Kochan and Nick Klessing – but now Pascal Brendel has slipped into the team and Milan Hosseini takes over the function of the substitute.

For Pascal, the World Championships is his first big competition. I think that especially the experienced athletes like Andreas Toba and I will prepare him for it, to take some of the pressure off him so that he can deliver his performance.

With Glenn Trebing we have an athlete who unfortunately had to fight with problems in the neck in the run-up to the European Championships in Munich and therefore could not quite (maximize) his performance. But now in the preparation it has looked very good with him. I am happy to be in the team with him, because he is a very good all-arounder.

With Nils Dunkel we have the European pommel horse bronze medal winner who has shown in the last two years that he has made very good progress. He will help the team a lot, especially on his strong apparatuses, pommel horse and parallel bars. We want to let his momentum flow over to the team.

With Andy Toba we have a very experienced athlete in the team, who had some physical problems lately and will not do the all-around, but will support us on four apparatus. I think Andy is always a very stable gymnast, whom you can send to the apparatus at the beginning and you know that he will then perform at his best.

Germany’s Kim Bui on retirement at 33: ‘I was full of emotions’