GB’s Jessica Gadirova: ‘Staying Strong Though The Tough Times Has Paid Off’ 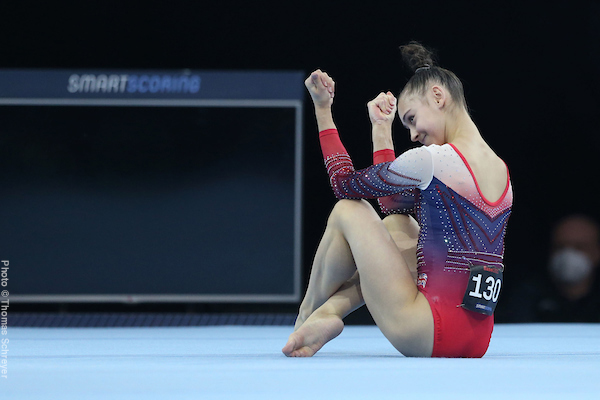 Winning a medal of every color at the recent European Championships in Basel has placed British gymnast Jessica Gadirova at the forefront of contention for this summer’s Olympic Games in Tokyo, a perfectly timed position to which the first-year senior credits her coaches, family and her own resilience.

Gadirova’s medal haul – gold on floor exercise, silver on vault and bronze in the all-around – was not only a complete set, but a particularly impressive collection for a 16-year-old in her first major senior international competition.

Born on October 3, 2004, in Dublin, Ireland, Gadirova trains at Aylesbury Gymnastics Academy in Aylesbury, a town approximately 45 miles northwest of London. She and her twin sister, Jennifer Gadirova, were members of the sixth-place British team at the 2019 Junior World Championships in Gyor, where Jennifer placed seventh all-around and second on vault. The twins were selected for the British team in Basel before Jennifer withdrew as a precautionary measure against an injury. Both Gadirovas are candidates for the British team in Tokyo.

In this International Gymnast Online interview, Gadirova reflects on her achievements in Basel, and describes the physical and psychological preparations that contributed to her breakout performance.

IGO: Of your gold, silver and bronze medals in Basel, which do you feel was the hardest one to win?

JG: I felt like the gold medal on floor was the hardest to win as some of the gymnasts in the floor final had a higher start value than mine, so it was all about the execution of each skill and the landings of each tumble in my routine to help me win that medal.

IGO: Which medal was most meaningful to you?

JG: All of the medals are so meaningful to me, I can’t choose one. In the all-around final, all I wanted was to have a clean competition and stick my beam routine, to show the world that I can stick my beam routine and that my fall in qualifications was just an accident and an unfortunate mistake. It was quite tough to stay strong and be brave after the fall, but I knew that I could do that skill very well. It was just a mistake I would have to learn from. That bronze all-around medal also meant that all my hard work I’ve done in the gym and staying mentally strong through the tough times has paid off at the end, and resulted in me winning that all-around medal.

The vault sliver medal and the floor gold medal are also so meaningful to me because, when I was younger, I was never that good at both events and found them quite difficult to get a good start value on. However, I never gave up and stayed consistent on trying to make them my best pieces, which made me realize that I did deserve the medals. I kept going, no matter how many times I failed, and pushed myself through the tough times, to get me where I am today.

IGO: Your fall on beam in qualifications looked very unsettling, but you carried on. What pushed you to not only resume your routine but carry on confidently for the rest of the weekend?

JG: I knew that fall was an accident and that it was not like me to fall that bad. It was quite embarrassing that it happened on the first day, but it didn’t stop me showing everyone the gymnast I am and what my best gymnastics looks like. When it happened I tried to forget about it straight away so that it wouldn’t affect the rest of my performances.

IGO: Being the last competitor in the floor final, and seeing the score that (Russia’s) Angelina Melnikova earned, what did you think it would take for you to overtake her for gold?

JG: I am a gymnast who doesn’t like to watch other gymnasts in competition because I like to focus on myself and my own performance, and not worry about anyone else or their scores. I only focus on what I can control. When it came to doing my floor, I just focused on doing the best performance possible and just hoped it was enough for a great score. My coaches did know about all the scores that were coming but they didn’t tell me because they know I don’t like to know, so they told me things to help me perform the best routine.

IGO: Other than beam in qualifications, you had a very consistent competition all the way through to the floor final, where you were the last competitor. To what do you credit that physical and mental stamina?

JG: Although I am naturally powerful and artistic, I still had to work extremely hard on everything in the gym. I have a great tumbling and leaps program, with a very good fitness and conditioning program, which my coaches Josh and Molly Richardson created. This helped me stay fit and be well prepared throughout the four days of competition. It was quite tough on the last days of competition as I have never experienced doing that many competitions in one week, but I knew that I could do everything and that I just had to fight through it and put it aside to show everyone a great performance.

IGO: Of your coaches, who coaches you on which apparatuses?

JG: We have such a great team and I work so well with my coaches. They both coach me on all pieces but sometimes Molly takes the lead role on beam, leaps, jumps, spins and the stretching program, and sometimes Josh takes the lead role on vault, tumbling and bars. They both make my conditioning program together. I enjoy both of them coaching because they help and push me in different ways to be the best gymnast I can be.

IGO: What words of encouragement did you get from Jennifer as you made your way through the competition in Basel?

JG: I would always call her at the end of the day, and she would ask me how I was and felt. Before every competition Jen would wish me good luck and tell me that I have got this. Also she would remind me of how proud she was of me, which gave me the belief that I can do it and deserved to be there.