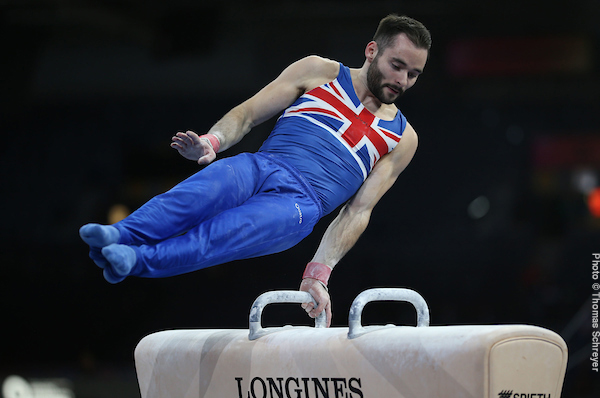 With five weeks to go before the opening of the Olympic Games in Tokyo, British gymnast James Hall is closing in on what he hopes will be both an individual all-around success and medal-winning team effort at the Games.

Last month, the 25-year-old Hall was one of four gymnasts named to the British men’s team for Tokyo. The other three members of the team are Joe Fraser, Giarnni Regini-Moran and Max Whitlock. The British women’s team for the Games, named earlier this month, includes Jennifer Gadirova, Jessica Gadirova, Alice Kinsella and Amelie Morgan.

As a team player, Hall has been cornerstone of the British squad leading up to Tokyo. He was a member of the silver medal-winning team at the 2015 Worlds in Glasgow and the 2018 Europeans also in Glasgow, and its fifth-place team at the both the 2018 and 2019 Worlds.

Hall shares his personal and team hopes for Tokyo in this International Gymnast Online interview.

IGO: Based on your performances in the various trials, how confident were you that you would be named to the four-man team?

JH: The trials for me were a bit of a mixed bag. They were good but I had a few shoulder issues that I had to work through and constantly battle, so they were a challenge in their own right. But, I hit a lot of personal bests including one in the all-around, so I was relatively confident I could fit in that four-man team and that I deserved to be there.

IGO: What would you consider your weak points – or, your “less strong” points – that need extra work before Tokyo?

JH: There’s always work that needs to be done in regard to fortifying my all-around score. That is my strength, and I need to stick a few more landings and make a few tweaks, but I don’t think there’s anything fundamental or any changes to routines needed. I just to continue to hone the skills, turn those three-tenth deductions into one tenth and erase some of the one-tenths, and make everything as flawless as possible.

IGO: At the 2019 Worlds, and the 2017 and 2019 Europeans, you and Joe Fraser swapped places as the top British all-arounder. How do you rate him against the other guys in the team, in terms of their potential to be your chief rival for a top-two all-around spot in qualifications and thereby a possible spot in the all-around final in Tokyo?

JH: Within Great Britain there are some excellent all-arounders, and on the team with Joe and Giarnni it will be a challenge to make that all-around final between us. But I’m looking forward to the challenge. I don’t think of it being a case of I’m against these guys. It’s an honor for me to compete alongside side them, and what will be will be, but I’ll do my absolute best and my training will be as good as I can make it, so whatever the result is, I can be happy.

IGO: As with other gymnasts, the pandemic stalled your momentum but also allowed for an extra year of training. In that year, what changes and advancements were you able to make, which created a new-and-improved model of James Hall for Tokyo 2021?

JH: Being totally honest, the pandemic was a hindrance in that I found it really hard to come back from having so much time off. We were out of the gym for months and that was difficult. The injuries, particularly my shoulder, seemed to worsen. Mentally it was very difficult. I was a quite a low place with the Olympics being postponed, too. but I had a great team around me. It’s been a tough journey, but I feel like I’ve bounced back and am now the strongest and fittest I’ve ever been.

JH: With regards to a high bar final and being in the last three European finals, I think just paying attention to the small details is the key – not changing anything massively in the routine. Again, turn the three-tenth deductions into the one-tenths and get rid of any deductions, and of course, stick the landing, as that has an enormous impact on high bar especially.

IGO: What do you think it will take for the British team to challenge for a team medal in Tokyo?

JH: I think we have all the ingredients to get a team medal. We know there are some real titans out there such as Russia, China and Japan, but I really do think we have the potential to score 260 points as a team. That will be a challenge but possible, as we have excellent apparatus workers and all-around gymnasts. So, all we have to do is continue to train hard and believe. Anything is possible.

The print edition of International Gymnast magazine’s recent coverage of British gymnasts is listed below. To purchase back issues, click here.