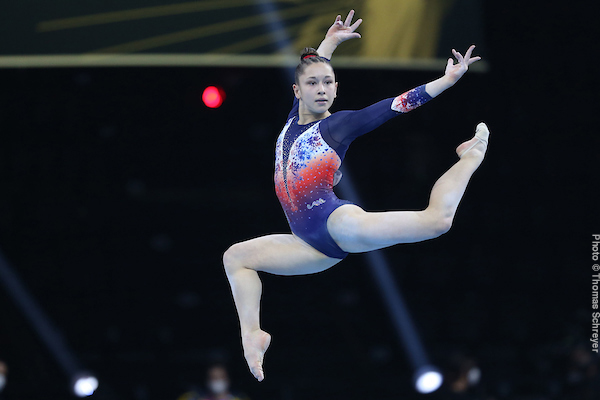 As recently crowned French national all-around gymnastics champion Carolann Héduit finesses her routines for next month’s Olympic Games in Tokyo, she is inspired by her and her teammates’ complementary strengths and unique characters that meld into a cohesive, successful unit.

After placing12th all-around at the European Championships in late April in Basel, Héduit jarred her right knee on her first tumbling pass (Arabian double front) in the floor exercise final. The injury forced her to curtail her routine, but she recovered quickly to place placed first all-around, first on balance beam and first on floor exercise at the French Championships held June 5-6 in Mouilleron-Le-Captif. A week later, Héduit, Marine Boyer, Mélanie De Jesus Dos Santos and Aline Friess were named to the French women’s team for the Tokyo Games.

Boyer, De Jesus Dos Santos and Friess were members of the French team that placed fifth in the team final at the 2019 World Championships in Stuttgart and thereby earned a team berth to Tokyo. Lorette Charpy and Claire Pontlevoy, the other two members of the team in Stuttgart, did not contend for the Olympic team because they are recovering from injuries. The French men’s team for Tokyo includes Julien Gobaux, Loris Frasca, Samir Aït Saïd and Cyril Tommasone.

Héduit shares her view of her assets, and those of her fellow Tokyo-bound French Olympians, in this International Gymnast Online interview.

IGO: How were you able to recover so quickly from your injury in Basel to per form a good all-around at the French Championships and win a place on the Olympic team?

CH: I recovered very quickly from my little knee injury thanks to my muscles which allowed me to withstand the violent shock. The week after, I continued to strengthen my knee so as not to lose my muscles, but without straining, which allowed me to recover very quickly. I was then able to train again normally and correctly. I had very good training, and therefore, I was able to do a very good all-around competition at the French championships and win my place on the Olympic team.

IGO: The four gymnasts on your Olympic team are all strong all-arounders. What do you think of your chances to be one of the top two on your team and thereby potentially  make it to the all-around final? And what are you going to do optimize your all-around program?

CH: The other three girls – Marine, Mélanie and Aline – are also very strong in the all-around, so I will have to fight for my claim to do the all-around. I know it is going to be difficult but I will try hard. For that, I devote all my training to success and quality, to look for the details and make sure to gain a few tenths, and thus find this place.

IGO: How would you describe each of the other gymnasts on your team, and what do you think of them as gymnasts and people?

CH: I admire Mélanie. She is quite exceptional because, on four apparatus, all of her elements are of high difficulty. On vault, she does a magnificent double twist. On beam she doesn’t waver. On floor her acrobatics are very beautiful, and on bars, she’s abundant. Everything is beautiful in her gymnastics. I like her a lot as a person, too. I’ve had the opportunity to hang out with her in competitions and outside the gym, and although I don’t see her every day, I get along well with her. She is a very happy person who never gets bored.

I get along very well with Marine, too. I consider her a “mom.” I find her very protective. You can always count on her. Her gymnastics is very beautiful and controlled. We can see that she is sure of herself.

Aline is the one I get along with the best. We’ve known each other since the 2017 French Championships in Ponts-de-Cé, and we hit it off right away. Since then, we have done many competitions together, including the European Junior Championships in Glasgow in 2018, then the European Games in Minsk in 2019. So I think I created stronger bonds with her. In addition, we are the same age. Her gymnastics is also very beautiful. You can see that she is sure of herself. She masters her movements, which are very clean.

IGO: What do you believe you offer to the team, unique from the other gymnasts?

CH: It’s difficult to answer that question. We have quite a few things to offer this team, but I can’t say what specifics I have. We’re all all-arounders, so I think we all bring a little something, and that’s what makes our team so strong. Everyone also brings joy and good humor. Maybe I’ll bring some zen.

The print edition of International Gymnast magazine’s recent coverage of French gymnasts is listed below. To purchase back issues, click here.