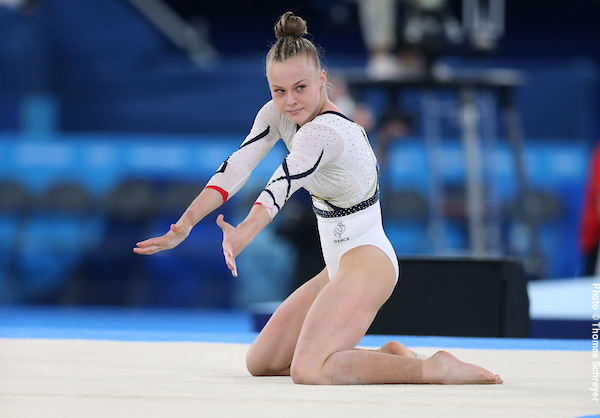 After winning three of four apparatus finals at the recent Challenge Cup of Varna, French gymnast Aline Friess is resolutely enhancing her role as a worthy member of her team leading to the 2024 Olympic Games in Paris.

Friess dominated the first Challenge Cup of the year, held in Varna from May 26-29, by winning golds on vault, uneven bars and floor exercise, and bronze on balance beam. The event marked her first international competition since last summer’s Olympic Games in Tokyo, where she placed 25th all-around in qualifications and helped France finished sixth in the team final.

Born July 5, 2003, in Obernai, Friess trains in Saint-Étienne under coaches Éric Hagard and Monique Hagard. She competed on two apparatuses at the 2018 European Junior Championships in Glasgow, where the French team finished fifth, and was France’s top all-arounder (11th place in the all-around final) at the 2019 World Championships in Stuttgart, where France ranked fifth in the team final.

Friess, who is targeting this summer’s European Championships in Munich, this fall’s Worlds in Liverpool and Paris 2024, shares her impressions and objectives in this International Gymnast Online interview.

IGO: Heading into the Challenge Cup in Varna, what expectations did you have to win one or more titles?

AF: My goals were to advance to all the finals and win a medal on vault. After the results of qualifications, I hoped to win more than one medal but I didn’t give myself a number.

IGO: In your floor routine in Varna, you didn’t show the highest level of difficulty (4.9), but what are plans to increase that later in the year?

IGO: What caused you to stumble back after your dismount (round-off, double back) in the beam final? Was it a fluke or a technical issue that you are still working to correct?

AF: This dismount doesn’t usually pose a problem for me. I heard the bell ringing, which means that I had only 10 seconds left to finish, otherwise I was going to take 0.10 in penalties. I think I was a little rushed to finish so I made a technical mistake. I would have done better to lose the tenth and concentrate more, but that’s how it is. I’m happy, however, to have managed to make up for it and not fall!

IGO: What special attention are you going to give in your training, so you will be even stronger in Munich and Liverpool?

AF: I am going to still work to increase my start values on floor and bars.

IGO: Being particularly strong on vault, what are your plans to increase the difficulty there?

AF: From now until Paris 2024, I want to work on the double-twisting Tsukahara. For now, I presented a full-twisting Tsuk, but if I want to challenge for a medal at the world level I need to increase the difficulty.

IGO: What will you do to continued being one of the best all-arounders on your team for Paris 2024?

AF: My goal is to increase my start scores a little on a few pieces of apparatus, validate them each time and continue to be consistent in success in competition, in order to be a sure bet for the team.

France’s De Jesus Dos Santos: ‘I Have To Work Hard To Realize My Goals’

French Olympian Julien Gobaux: ‘I Don’t Want To Regret Anything’

Charpy on Tokyo postponement: ‘As if I would end this now – no way