Charpy on Tokyo postponement: ‘As if I would end this now – no way’ 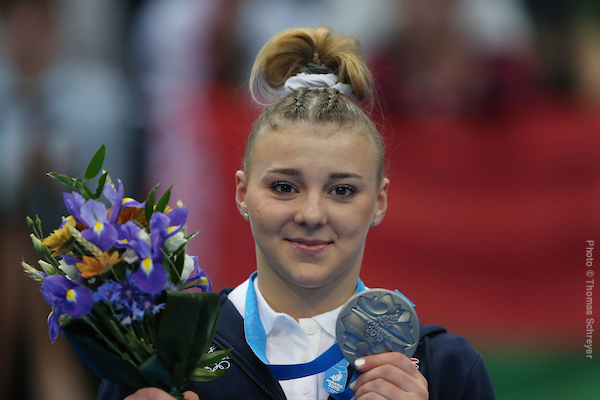 Five weeks into post-quarantine training, French gymnast Lorette Charpy has wasted literally no time pondering the extra year of work ahead of her as she aims for the postponed Tokyo Olympic Games.

Charpy is instead diligently coping with what she deems “many recommendations from the French (gymnastics) federation and some health restrictions from the Ministry of Sport” as she prepares for the Tokyo Games that have been pushed from next month to next summer due to the COVID-19 pandemic. She returned to the gym on May 15.

“When I learned the Olympic Games were going to be postponed by a year, I never thought one second if I would quit gymnastics or not,” said Charpy, a member of the French team that finished fifth at last fall’s World Championships in Stuttgart and thereby earned a team berth to Tokyo. “For me, it was obvious to continue my road to my final goal, the Olympics. As if I would end this now – no way.”

Charpy credits her coaches, Eric Hagard and Monique Hagard, for her current state of durability and confidence. “I have had a lot of coaches during my career,” she said. “Eric is more focused on physical preparation, vault, bars and floor. Monique is my beam coach, ballet teacher and floor choreographer. She’s very innovative and a great motivator. I’m very happy now to have both of them.”

In this International Gymnast interview, Charpy shares her thoughts on quarantine, her participation in the viral video “Don’t Rush,” training last summer with Simone Biles in Texas and her preparations for the Tokyo Games.

IG: What kept you mentally and physically sharp and focused during the quarantine?

LC: I was confined with three of the French national team gymnasts – Aline Friess, Alizée Letrange-Mouakit and Mélanie de Jésus dos Santos – for the Olympic Games final preparation. At that time, I didn’t really know how long it would take to come back into the gym. As I had my goals in mind, my motivation was still here. My practices were mostly based on physical preparation with a little bit of more specific gymnastics skills due to the lack of equipment. When I learned the Olympic Games were going to be postponed by a year, I never thought one second if I would quit gymnastics or not. For me, it was obvious to continue my road to my final goal, the Olympics. As if I would end this now – no way. At the beginning, I was telling myself that one year will be a long period of time but actually I’ll use this extra year to improve my gymnastics, which was not perfect in the first preparation, and add some upgrades.

IG: What was your daily routine in quarantine?

LC: In the morning, for two-and-a-half hours, I was doing general physical preparation – arms, abs, legs – and also some technical work with low beams and low bars in order to keep the specific sensations as good as possible. In the afternoon, we had leg conditioning with sprints on a steep slope or riding a bike, and stretching. Today, I feel that all this work was a benefit to me. Those two sessions filled my days, and between this I was doing my schoolwork.

IG: Eric mentioned that you have some upgrades to your routines. Since your training was disrupted by the quarantine, what is your plan for recovering these upgrades?

LC: During quarantine, I worked on improving my weaknesses like leg explosivity and power, and it helped me when I first returned to the gym. I had good feeling especially on floor and vault. I also improved my “courbette” (snap down), and every tumbling pass came back relatively quickly. Of course, I need more repetitions, but everything will come back at the right time.

IG: This year has been challenging to you, not only because of the quarantine but also the problem on bars at the American Cup in Milwaukee in March. The equipment failure (when the bars loosened mid-routine) could have been catastrophic, but you quickly adjusted by simply swinging down instead of trying the Jaeger. To what do you attribute that quick thinking, and then your ability to subsequently perform the full routine only minutes later?

LC: It is true that it is not something that often happens. I could have finished by believing the bars don’t want me, but I love them too much to let them go! More seriously, it was a really weird and awkward situation because inside of me I knew it was not my fault – the (lower) bar was wonky – but at this moment I questioned myself. The hardest part was to focus again because I had already done my little ritual once. And then, I learned it was the turn of the girl on beam, so I had to do it a third time. But with all the work done weeks before, I was confident. I have trust in this bars routine, and that helped me to be calmer.

IG: You’ve also been able to inspire people through your participation in “Don’t Rush” (quarantine-themed viral video featuring gymnasts from around the world including Becky Downie of Great Britain, Angelina Melnikova of Russia, Nina Derwael of Belgium, Flavia Saraiva of Brazil, Ellie Black of Canada and others). How did you decide on the “scene” that you performed in the video?

LC: I was so happy when Rebecca Downie contacted me on Instagram. The first goal was to doing this video with medals, but as I was confined in a house in the countryside, I only had my vaulting wrist guards with me. Luckily, I had my American Cup training leotard with me. It was a huge honor to be part of this video alongside so many famous gymnasts.

IG: When you trained last summer with Simone in Houston, what specific impact did she have on your gymnastics perspective?

LC: First of all it was very exciting and motivating! Then, I noticed that she was very relaxed and easy-going in training but in an efficient way on the apparatus during repetitions. I found this great because gymnastics, and elite sport in general, is a lot of pressure, and this way of practicing inspired me a lot even if obviously, we are all different and especially very different from Simone.

IG: Your best apparatuses have been uneven bars and balance beam, but with Tokyo now a full year away, what is your hope for your role on the Olympic team? Will you strive to make it as an all-arounder, or do you believe you can best contribute by specializing in your two best apparatuses?

LC: I am still targeting doing the all-around and I’m training every day for that. But first of all, I have to make the team for Tokyo. Of course, bars and beam allow me to have good results in the all-around, but I’m working as hard as possible on vault and floor to increase my D(ifficulty) scores. For me, it would be too bad to compete on only two events.