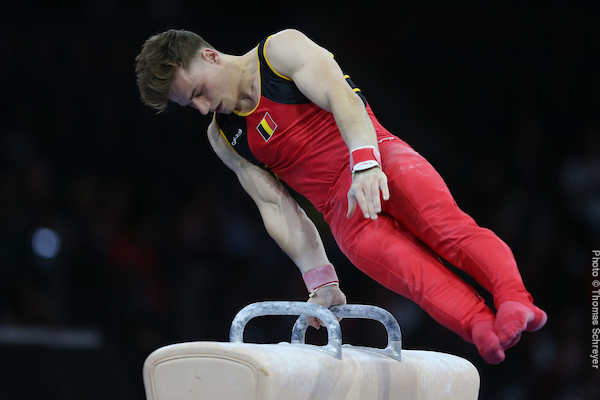 Last October he earned his country’s highest male all-around ranking in world championships history, and over the recent holidays he swiftly fulfilled perhaps his worthiest New Year’s resolution by getting engaged to his girlfriend.

With European and world championships on his target for 2022, and motivated by his successful deeds from the last few months, van den Keybus seems in the best control yet of his destiny.

Van den Keybus’ 16th-place all-around finish at last fall’s World Championships in Kitakyushu – an improvement of 42 spots and over two points from his showing at the 2019 Worlds in Stuttgart – ushered him into a leading role on the Belgian team that aims to qualify for the 2024 Olympic Games in Paris.

Born April 14, 1997, in Lokeren, van den Keybus trains under coaches Koen van Damme and Bram De Schepper in Ghent. His other top results include ninth place all-around and second on horizontal bar at the 2014 Youth Olympic Games in Nanjing, and 15th all-around at last spring’s European Championships in Basel.

Van den Keybus, who is adapting his routines for even higher finishes at this fall’s Worlds in Liverpool and ultimately the Paris Olympics, shares his plans, hopes and expectations in this International Gymnast Online interview.

IGO: Your 16th-place finish in Kitakyushu was a great improvement from the previous world championships in Stuttgart in 2019. In the two years between Stuttgart and Kitakyushu, how were you able to better your all-around so much?

LVDK: After the World Championships in Stuttgart in 2019, I was gutted. I missed the opportunity to go the the (2020) Olympic Games because of a few tenths. The interviews and reflection after Stuttgart made me realize that I was not able to be better on that competition floor that day. I realized I needed to work more on some key points in my game plan, and by “I,” I mean “we” because as a team we grew a whole lot, and I could give and take from a strong team spirit through the buildup for Worlds 2019.

IGO: You made history for the Belgian men as their top all-around finisher in world championships history. In what way does this result reflect the progress you and, as the leader of the team, your entire team has been making in recent years?

LVDK: The result in Japan reflects two years of commitment to our/my dreams, which is to make it with a full team to Paris 2024. Being the leader right now makes me a better gymnast and human. I feel like I stepped into the leading role because I wanted more for us than just being a “team top-24” competitor. Right now I feel like I am a gymnast/coach, and that feels right.

LVDK: I try to be a full all-arounder, and right now I am focusing on upgrading the difficulty value on parallel bars. With some luck I will have something ready at the European Championships (in Munich in August). Horizontal bar has always been an easier objective for me. Why? I really don’t know, it just comes easier than the rest for me. Sadly, I’m frightened of the release elements so my routine (joking) won’t be getting any better. Furthermore, I am trying to complete my all-around status on the world stage and upgrading where possible.

IGO: As you restructure your routines to satisfy the demands of the new Code of Points, what are your biggest challenges?

LVDK: Floor will be the most challenging of them all. I need to learn a few new skills and try to combine some of them, so that won’t be simple.

IGO: What specifically are you doing to boost your Difficulty scores?

LVDK: The only boosts for D-scores I’m implementing in the near future are on p-bars and vault. On vault I will try to go for a Yurchenko triple twist, and on p-bars a D-score of 6.4 is the goal.

IGO: What will it take for you to break into the top 10 all-around in Liverpool (2022 Worlds in October)?

LVDK: I guess to break that barrier to get into the top 10 will require upgrading p-bars and vault, which gives a fair advantage over some gymnasts in that area. It’s also important for me to keep the all-around scores on a good level.

IGO: How and with whom did you celebrate the holidays?

IGO: What are your special resolutions for the new year, in and out of the gym?

LVDK: Well, the first one is already checked off – namely that I proposed to my girlfriend, so we got that out of the way pretty fast in 2022. As a sporting resolution I’ve set even higher standards than last year, so hard work is a must this year. Outside of the gym I’ve set a goal to plan more time into my schedule for family and friends.

Belgium’s Nina Derwael: ‘It was such a magical moment’

Nina Derwael: “It feels as if the uneven bars speak to me, and in return, I listen.”