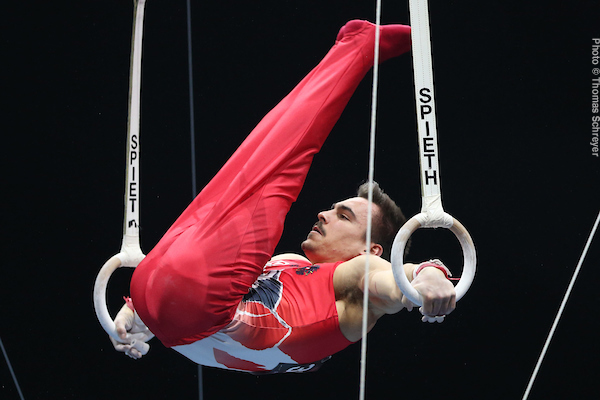 As the recently crowned still rings champion of the World Challenge Cup 2020/2021 series, Austrian gymnast Vinzenz Höck hopes to carry the confidence and momentum of that conquest into the final at next month’s World Championships in Kitakyushu, Japan.

The 25-year-old Höck topped the WCC series on his best apparatus through ranking points he collected at four competitions in which he won gold: the 2020 Challenge Cup of Szombathely, and the 2021 Challenge Cups of Varna, Osijek (tie) and Koper. Last weekend Höck finished second on rings at the Grand Prix of Szombathely.

Höck’s streak of WCC competition golds and his series title also caught the eye of International Gymnastics Federation (FIG) president Morinari Watanabe, who attended the Koper competition last month. “A very good gymnast,” reported Watanabe on WhatsApp. “I think he can get a medal in 2024 Paris“.

Watanabe’s faith in Höck, whose talent and potential first gained global attention when he won the 2014 European junior title on rings, is well-founded. Thus far Höck’s best world championships finish is 16th at the 2019 Worlds in Stuttgart, but he placed second on rings at the 2020 European Championships in Mersin and seventh on rings at this past spring’s Europeans in Basel. He tied for silver on rings at the 2019 University Games in Naples.

In this International Gymnast Online interview, Höck reflects on his World Challenge Cup series victory, and details his plans for Kitakyushu and ultimately, the 2024 Olympic Games in Paris.

IGO: Over the course of the 2020/2021 Challenge Cup series, in which aspects do you feel you improved your routine so you could end up with the series title?

VH: Considering my routine throughout the World Challenge Cup series, I got more self-confidence with each competition. That was also the main aspect that made me upgrade my routine throughout the series. I started with a basic routine in Hungary last year, in Varna I did an upgraded routine with a 6.1 Difficulty score and in Osijek I could even add an extra tenth in the final – 6.2. Without that upgrade I believe I would not have tied for the first place in Osijek. Due to some minor health issues, I was not able to do my full set in Koper, but I was able to compete it last week at the Hungarian Grand Prix in Szombathely and I am also planning to do my full set (at the World Championships) in Japan in three weeks’ time.

IGO: Watching the Tokyo Olympics, in which areas of your gymnastics do you see the most need for improvement or adjustment, in order to compete well against the Olympic finalists?

VH: I think the start score is where it needs to be. Regarding the execution there is always something to work on and do better, if you are not Petrounias or Liu Yang! The dismount and the landing are very important, especially on rings. You have to make the decision how difficult your dismount can be, that you still land it well. At the moment, together with my coach, I decided to do a full-twisting double layout. It is not the most difficult dismount, but I try to execute it well and do a good landing. Maybe in the future I will try to upgrade it and do a more difficult one to also push my D-score.

IGO: What do you think you will need to advance to the final at the World Championships in Japan?

VH: The most important thing is to stay healthy. Especially in times like this, it is the most important thing. Only then can you compete well. Furthermore, I am planning to do my full set in qualifications. It is a tough and exhausting set for me, but I believe I must take the risk, because there will be a lot of other good rings workers in Kitakyushu. If I hit my set well, I believe I have a good chance to advance to the final.

IGO: What are your plans for continuing to compete in the all-around? Or, do you intend to focus on just a few apparatus…or perhaps only rings?

VH: After Stuttgart 2019 (World Championships) I shifted my focus away from the all-around towards rings. At the moment, I compete only on rings, and it has worked out quite well so far. So, I am planning to keep the focus on my best event. If the team needs some scores for a team competition I will do some other events as well, but the main focus will stay on the rings.

IGO: With the Paris Olympic Games “only” three years away, how close to your potential best do you feel you are now? And how close will you be by 2024?

VH: I hope that I will reach my peak at the Paris Olympics but it is very difficult to plan such things. I will try my very best to be in the best shape possible, but I do not expect that the road towards the Olympics will be without any obstacles and setbacks. That’s part of life and hence also part of the game. Nevertheless I hope I can overcome struggles and qualify for the Paris Olympics.